After a woman on TikTok called out the double standard, women posted videos celebrating the bodies that have created and birthed human life.

Let's be honest: If you're not familiar with the term "dad bod" at this point, you might have been living under a rock since it first went viral in 2015. The term—"a physique characterized by undefined muscles beneath a light layer of flab, usually topped off with a beer belly," according to The Cut—has been thought of as endearing and attractive. And one mom is over the gender-based hypocrisy.

"Do you ever think about how society is so accepting of dad bods, and yet, it's women who literally carry and birth the child," notes Whipple. "And the second they do, they're bombarded by society about how to lose the baby weight. Because their 'mom' bod that literally birthed a human is not accepted, but a dad bod is."

She shared the clip to the social platform with the caption, "Society is wack."

It's no surprise that since video was posted on July 14, it has gained over a million views and thousands of likes and comments.

Tons of moms have since chimed into the conversation as well, requesting that Whipple turn her point into a sound on the platform so they could use it to show off their "mom bods."

And ems_lace88 stood in front of a mirror flaunting her bare, postpartum stomach, noting that she's created and birthed five babies.

Cassandra Meltola did a trippy edit walking toward the camera in her underwear while holding her little one, writing in the caption, "Our society is backwards, luckily us moms have the power to change the next generations."

Upon seeing women's responses, Whipple told Buzzfeed that she started crying. "It's a bittersweet mixture of emotions: happiness to see women embracing their bodies, grief for the way things are, relief that so many people agree, anger for the misogyny that came through in the comments, and hope that things will get better."

Ultimately, "Women aren't given grace about their bodies the way men are," pointed out Whipple. But with hope, conversations like these will make that a thing of the past. 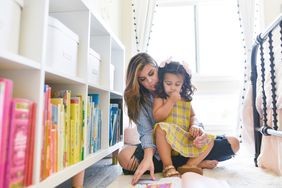