Buckle up, because this Humans of New York story is one of power, abuse, and a mother who never gave up.

Confession: despite vowing to log off of social media for Lent, I happened to catch a glimpse of the start of a story on the infamous Humans of New York page yesterday and immediately I knew that I would be risking my soul because there was no going back.

As soon as I saw those fateful numbers of 1/13, it was over for me. And I wasn't alone—comments soon poured in about people canceling their plans for the rest of the day, sucked in just as hard as I was. ("What kind of journey am I about to take today? Oh lord...," wrote Mary Claire Patton.)

I spent the rest of the day sneaking away to my bedroom to slyly check my phone so I could catch the latest installment, thrilled when I managed to get on right at the perfect moment when the last update was posted. If you haven't read the story yet, it centers on what appears to be a picture-perfect couple: a beautiful blonde woman married to the life-of-the-party handsome and charming dimpled man. But by the end of the first paragraph, Tripp, as we would all come to know him with a mixture of fascination and repulsion, was already in prison.

From there, the story takes the reader on a truly unbelievable journey of twists and turns with everything from sperm donors to prostitution to a mysterious phone call that unravels everything. Trigger warning: there are some horrific accounts of abuse in this story, including child abuse, and this is a real life with very real children who have been affected, so let's all keep that in mind as we read.

But in the end, the story is one of a woman who refused to give up; a woman who had been through the worst of situations and somehow, was able to rise above it. She is a mom who, despite all the odds, managed to keep the love of her children fiercely intact. For me, it was the sheer amount of love this woman managed to infuse into her children that kept me riveted. I admit, I wish I could be that type of mom, right down to the fact that she also seems to be the type of mom who manages to always be put together (not my skill in life).

I even went as far as to browse the comment section and found myself shocked when I came across the fact that the woman in the story had a real name, a Facebook page, and is a real realtor as well as a motivational speaker with a book coming out (I'd say so!). Why any of that should have surprised me doesn't make a lick of sense, but yet, it did. It's almost like, ironically, we forget there are real humans in these stories, despite, of course, that being the whole point of the page. But curiosity got the best of me and I looked at both her profile and her real estate page and found myself impressed, all over again, by the obvious force of this woman, also known as Venus Morris Griffin.

There is the clear runner's discipline in her limbs, the not-so-subtle marks of money, the successful career, and the fact that she somehow has given birth to 7 children?! I've given birth to 5 myself and let me tell you something: my abs will never look like those of Venus Morris Griffin.

And maybe that's part of what drew so many of us in—she has, for all intents and purposes, the makings of a classic American rags-to-riches story: traditional beauty, picture-perfect children, and a story that ends with her as a successful, kick-ass career woman who still somehow managed to pull off being a loving mother who didn't miss a second of her kids' lives. She's the perfect mixture of the type of mother that is praised the most in our culture: beautiful yet fierce, strong yet nurturing, successful yet able to show up to the class party.

For others, it was the fact that her story was all-too-relatable. Jessica Lemmons, a copywriter and mother of two, shares that she was pulled in by the story because, unfortunately, it was one she knew all too well. "Because it was clear from the get-go that she was a mom who'd felt trapped in a terrible situation, and the father of my children may not have been my abuser, but listening to her story of how she got away and pulled her family up with her hit home HARD," Lemmons says.

Others simply found that Griffin's story was one they couldn't look away from—and one they found themselves invested in for the sake of a mother who wouldn't quit striving for a better life. "After reading Part 1, I found myself scheduling my day around her story," admits Cassandra Waters-Brusie, a mother of two from Indiana. "Within 8 hours, I experienced the gauntlet of emotions one typically derives from survival stories. From anticipation to sorrow and anguish, to the triumphant ending filled with inspiration and freedom. I felt I was right there with her, cheering her on through it all."

In short, Venus Morris Griffin seems like the real deal—from the $10,000 scholarship she offers to children with incarcerated parents to the career she has built to the family she has (oh, did we mention she is also a grandma of two?), hers is a story that allowed us to forget the horrors of the world for at least a day, and remember that all you can do is keep going through the hard times and that sometimes, happy endings really do exist.

Or, in the words of Griffin herself: "The only thing we can do is put one foot in front of another and keep going." 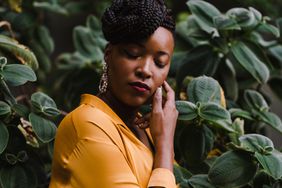 Breaking the Generational Curse of the Strong Black Woman