If you have more than one kid, prepare to feel seen.

There's nothing quite as exciting as welcoming your first child. You do all the things: From creating Pinterest boards for your impeccable nursery decor to stocking up on adorable (often wildly impractical) infant clothes to scheduling a newborn photoshoot. In all likelihood, you uphold that first-time-parent energy long after you've brought that firstborn home-meticulously sanitizing every item, documenting every milestone....and taking (and categorizing) pictures of that sweet baby's every move for posterity.

But then your second (or third or fourth or fifth) baby comes along-and while you're still an outstanding parent, you have no choice but to adapt to your new normal (which involves...how shall we say it? A lot less time). Maybe that means you say goodbye to the monthly social media updates...and while you'd love to snap endless photos of all your kids, you often don't have time to get the shot of your baby before you need to dart off after your bigger kid.

Sound familiar? If so, you'll relate so hard to this TikTok video, which features a mom of three who has clearly experienced that same shift in her parenting approach.

The video, which was posted by Nicole Oliver, has gone viral-and we're guessing parents of multiple kids who understand exactly what Oliver is speaking to account for many of those 14 million plus views.

The hilarious clip features a voiceover asking "Mom, can I see my baby pictures?" three times. When the first child asks, the mom nods enthusiastically and hands over a stack of perfectly curated albums and scrapbooks, along with a box of mementos. When the second child asks the same question, the mom pulls out a single album. And when the third child wants to see their baby pictures? Well, the mom looks sheepish before simply handing over her phone. Relatable!

Fellow TikTok users seem to agree. One commenter agrees, saying her first and second children have full albums, while images of her third, fourth, fifth, and sixth all just live on her phone. Several other comments are simply adding that they relate to the video-though there are others who say that in their own families, the reverse is true. But Oliver, who created her TikTok page for the purpose of creating "#RelatableMamas content," seems to have a pretty good idea of how many parents out there will feel the message of this video, which she simply (and appropriately) captions: How true is this 😂😂" 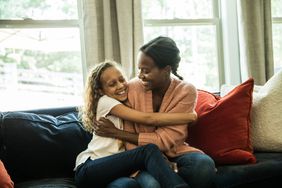