The popular cartoon has never shied away from addressing difficult topics through the eyes of a child. Does that include pregnancy loss, too? One TikToker thinks so.

Bluey's curious, energetic, and sweet spirit has made the show that bears her name a hit with preschoolers worldwide. But even parents have found reasons to love the Blue Heeler pup and her family, which includes a little sister named Bingo, mom named Chili, and dad named Bandit. The show tackles tough topics like sibling disagreements and compromise, navigating working parenthood, and death.

But has it also subtly touched on pregnancy loss? One TikToker thinks so. The user, a dad who regularly posts about Bluey under the name @world.shaker, shared his theory in a now-viral video.

"I want to share one of my Bluey theories, and unfortunately, it's not a happy one," he says. "This theory is that Bluey is a rainbow baby."

In his TikTok, Dad explains that a rainbow baby is a way parents describe a baby born after a pregnancy loss. It may seem heavy for a kids show, but he isn't putting it past Bluey producers. He reminds viewers that the show has covered other issues, like bullying, divorce, and premature birth.

"Bluey is also a show that is very deliberate, so when they put the main characters on the screen, they are there for a reason," he says.

He then calls viewers' attentions to season 2, episode 16, when Bingo and Bluey reenact a moment from their parents' lives on Mother's Day. Bingo plays the role of Chili, who is pregnant, and has a balloon underneath her shirt to create a bump. But then, the balloon pops, and Bandit quickly grabs Chili's hand to comfort her.

But why go subtle instead of addressing the topic head-on, as Bluey has done with other issues? Dad has a theory for that, too.

"There's not really a great way to explain to a child what a miscarriage is," Dad says.

Many commenters had the same thought.

"I haven't watched much of Bluey, but my rainbow baby [has]. I immediately burst into tears when he grabbed her hand. I think you're right," said one person.

"As someone who lost a baby, I noticed Bandit's reaction to comforting Chili right away," another said.

Others loved the scene, though they thought the younger pup was the rainbow.

"I don't know why but I took it that Bingo was the [rainbow] baby. But yeah, I [definitely] was a mess after that scene, and I haven't even suffered a loss," the user wrote.

Pregnancy loss is common. About 10 to 20 percent of known pregnancies end in a loss before 23 weeks in what is often termed a miscarriage. In recent years, celebrities like Beyonce and Meghan Markle have opened up about their losses. Yet many don't. And it doesn't help that when some high-profile people reveal a pregnancy loss, some respond that it should be a private matter. This was particularly apparent after Markle wrote a New York Times OpEd about her experience.

The truth is, stories like Markle's, and covering the topic on shows like Bluey and others, can raise awareness for pregnancy loss. In turn, people can feel less alone—and that's so important. 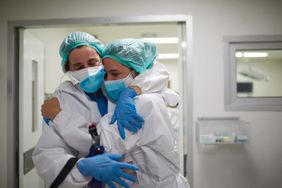