Someone needs to get their priorities in check. Oh, and did I mention that this will be their *first* child?

Welcoming a new baby means a major shift in life as you know it—except for this dad-to-be, apparently.

A pregnant woman recently took to Reddit's "Am I The A**hole" (AITA) subreddit to get some feedback on her current dilemma. "AITA for telling my husband that he's not going on the yearly trip this year?" u/Mundane_Lettuce175 questioned. The reason she wanted him to skip his annual boys' trip? It's scheduled for right after her due date.

"Back when my husband was 16, him and his 3 closest friends started a yearly camping/kyacking [sic] trip," the first time mom-to-be wrote. "The trip is always at the end of July and usually last 3 days. Over the years, the trip has gotten bigger with the addition of wives and new friends. It doesn't matter to the guys, as long as they get their trip and get to spend the weekend drinking and escaping from responsibility."

Over the years, each of the men—not including the dad-to-be in question—has missed the trip when it coincided with their wives' pregnancies. "Well, the year has finally came," she wrote. "It's our turn to miss. I am due in the middle of July so I won't be pregnant during the trip, but I will have a newborn."

Makes sense. The friend group even reserved a destination the mom-to-be wanted to visit until next year. So what's all the drama about? Well, things went downhill fast when the original poster (OP) reminded her husband that he'd have to miss out this year, too.

"This sparked a fight between hubby and I where he said I wouldnt [sic] be pregnant anymore so theres [sic] no reason to miss," she wrote. "I told him we will have a few week old baby at the time, that I needed him home. He threw a fit saying he has never missed a year and he wasnt [sic] going to start when I could have my mom come help me. I called him an a** and told him he wasnt [sic] going this year. We ended the arguement [sic] in a 'we will see.'"

It gets worse. Many of the husband's family and friends are pressuring the pregnant Redditor, even going so far as calling her a "needy b*tch" for putting her foot down. "Two of his friends are with me on this saying he needs to step up because this wont [sic] be the only thing he will miss being a parent."

Wow, wow, wow. Where to begin? How about this: No, u/Mundane_Lettuce175, you most certainly are not the a**hole. Your husband, on the other hand, has a few things to learn about being a partner and a parent.

"What if OP needs an emergency C-section or there are any other complications (knock on wood there aren't!)," one Redditor commented. "Besides, isn't bonding with a new baby sort of a thing?" And, as someone who went into labor two weeks early with her first child, I'd like to point out that there's also that pesky little detail about the trip and due date being a couple weeks apart—and the very real potential that the baby could come early or late.

One after one, Reddit users reinforced the reality that the new mom will need support for several weeks (at least!) after the baby is born, but that it shouldn't just be her responsibility to care for the newborn.

"Why is he acting like it's only OP's baby," one commend read. "Sh*t, even if it were the third kid, doesn't [that] kid deserve the same amount of father bonding in the really important first weeks of its life as the first kids? Husband is really showing where his priorities lie, and they aren't with his wife and soon-to-be-alive baby... And that's not even getting into if she or the baby have complications from birth. Dude can sit out 1/13 trips!"

Unfortunately, some Redditors could commiserate on a personal level. "My ex-husband scheduled knee surgery 1 week after our first baby was born," one user wrote. "He refused to re-schedule it, even though he could have. He's not a professional athlete or anything. He was just selfish. I had a 23 hour induced labour, was taken to the OR for a C-section, and the Dr. said, 'Let me try one last thing before we operate.' My baby was removed with 'high' forceps, and I had over 50 internal and external stitches. I had to sit on a rubber donut for weeks after. I had a hard time breast-feeding. I had postpartum depression. And I had a husband who would not help because he was on crutches." No wonder this is now an ex.

Of course it's important to prioritize your relationship, self-care, job, and social life even after you become a parent. There's enough change after adding a baby to the mix; there's no reason you suddenly have to become a hermit, too. But your priorities and responsibilities should shift, at least a little, to make sure your partner and your child are OK and to take the time to adjust to the new normal as a family—especially in those early days and weeks. It might be a major red flag if that doesn't seem like a given. 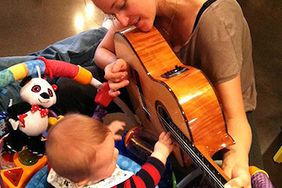