This Parody of Middle School Angst Is So Accurate it Hurts

Every age comes with its own quirks. Everyone has heard of the terrible twos and the fournadoes, the precocious elementary kids and the grumpy teens, but when it comes to middle schoolers, you really have to have one to understand. The transition age between kid and teen is fraught with drama, and as any middle schooler's parents will tell you, it can be a challenging age.

One YouTuber decided to show the world just how challenging with his parody video about middle school boys. Trey Kennedy absolutely nails it with his reenactment of what his bio describes as his "behavior from 15 years ago." Trey, our sympathies to your mother!

In the opening scene, Kennedy, channeling his inner middle school boy, runs through his front door, joyfully exclaiming that he's home from school...then promptly chucks his bookbag on the floor. A voice from off-screen, his mother, tells him to pick it up and drama ensues. Huffing and puffing, the almighty eye-roll, melodramatic handwaving, and the kind of attitude only 12-year-olds can pull off—it's a perfect recreation of a scene many parents see every single day.

What follows is a day in the life of a 12-year-old boy—farts, braces, crumpled homework, and a boatload of attitude. The video, part of a series, is definitely resonating with parents everywhere and has racked up over 350k views in just five days. Commenters are not being shy about the uncanny realism. "The flopping of the body on any soft surface is SO accurate. It just makes me cringe," said one commenter, while another got a little nostalgic about his own middle school days saying, "The 'I didn't do anything' after deliberately doing something really took me back."

Kennedy has done three other videos about classic middle school boy behavior (this was part four) and they're all hysterical.

Parents of younger kids, brace yourselves, this will be your life in a few years. Parents of middle-schoolers, we see you. Godspeed. 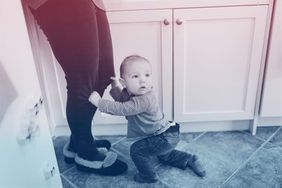