You might want to have tissues on hand while you watch this.

It would be tough to find a person whose social media feeds aren't chock-full of election-adjacent content right now. But if you're anything like me (read: a parent who follows a lot of other parents and consumes a lot of parenting content), you're seeing something specific. Photos of beaming children accompanying their grown-ups to the polls. Parents who share that they're voting to create a better world for their children and dub their toddlers "future voters."

Elections just hit you differently when you're a parent; it almost feels like you're voting on behalf of your kids, advocating for them before they can do so in this way themselves. I've exercised my right in the last four elections, but I've never felt what I feel right now—and while there are several reasons for that, the biggest one is this: Right now I am a mother. I see my children and know that I'm no longer just voting for a candidate. I'm voting for their future, the futures of so many other children, and the nation they will all inhabit. And regardless of which side you're on at the moment, you probably understand what that feels like.

A song from the Hamilton soundtrack articulates that point far better than I ever could. The song is called "Dear Theodosia", and if you've never heard it, expect full-body chills when you do. A special version of the number was released in honor of the election, and when you listen to words, you'll understand why.

The lyrics include lines like "You will come of age with our young nation/ We'll bleed and fight for you, we'll make it right for you/ If we lay a strong enough foundation/ We'll pass it on to you, we'll give the world to you/ And you'll blow us all away."

Cast members from the musical's various productions just released a cover of the song and it's just beautiful...and, if you're a parent, it probably cuts right to the heart of what you're feeling these days. It only adds to the haunting beauty of it all when you consider that one of the actors who sings in this cover is Miguel Cervantes, who lost his 3-year-old daughter to epilepsy and Infantile spasms. The strength it must have taken for Cervantes to sing this particular song in this video—it blows my mind and makes my heartache.

'Hamilton' Star & Family Grieve the Loss of 3-Year-Old Who Died From Infantile Spasms: 'She Went Peacefully in My Arms'

So give this song a listen. It just might be cathartic to listen to something that perfectly captures how you're feeling as we wait for the results of this election. For this mama, it definitely is. 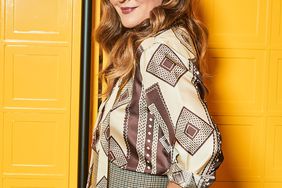