This 'Frozen' Parody Is Every Parent Waiting for a COVID Vaccine

If you're impatiently waiting for that COVID vaccine to be available to you, this video from The Holderness Family will speak to your soul.

If you're still waiting for your shot (no pun intended) to get vaccinated against COVID-19, we get how impatient you might be feeling right now. Watching your vaccinated friends resume heavenly activities—for instance, date night inside an actual restaurant—can be tough when you're (still) bored in the house, in the house bored. And by "bored," we obviously mean overwhelmed and overworked as all get out because pandemic parenting is no joke.

Rest assured, though: Brighter days are coming. If you need helping getting pumped up for them, this video will do it for you. The Holderness Family just released a parody of a song parents everywhere are really familiar with (hint: It's from a certain movie that has undoubtedly played in your home 8,782,068 times), but the lyrics nail the excitement many of us have over the prospect of resuming some semblance of normal life.

The video is set to Frozen's "For the First Time in Forever"—please join me in breathing a sigh of relief at the news that we do not have to listen to "Let it Go" again in order to absorb the humor of this parody.

It begins with the father behind some of the Internet's favorite musical parenting videos, Penn Holderness announcing that its vaccination day.

"I'll see actual, real-life people/It'll be totally strange/I might even to go see a game," Penn sings. The dad also gleefully sings about seeing someone other than his wife, Kim, (and maybe even going to a bar with buddies!) before reminding her that he loves her. The coupled-up folks among us feel this moment in our souls.

Penn also sings about his wife's complicated feelings—like the dread of having to wear a bra again after a full year of getting accustomed to forgetting such things even exist.

It isn't just funny, though: Penn makes some serious points about finally being able to see his parents again and live without the constant fear of dying, which is totally valid, especially since Penn also sings about having asthma (which may increase his risk of a severe or even fatal case of COVID).

This video is both hilarious and relatable—and also sobering, as so many of us can relate to just wanting so badly for the fear of becoming seriously ill and/or infecting others to pass. Not to mention, the desire to hug our friends and families and the need to return to our baseline (already incredibly difficult) mode of parenting is real.

So while we wait for our own shot at getting the vaccine (as well as the chance for everyone around us to be vaccinated as well) let's revel in this funny little video that perfectly sets our feelings to music. 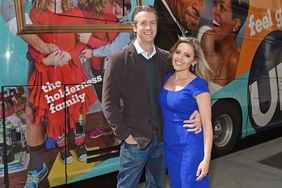 The 'Bruno' Parody We're Cry-Singing Along To