PATTI + RICKY offers a wide range of stylish, functional clothing and accessories for kids with disAbilities, as well as men and women.

When you hear or read the phrase "medical accessories," chances are that you don't immediately think either "cool" or "stylish" can come before it. But contemplating this very issue, Alexandra Connell, founder of PATTI + RICKY, thought, "Why not?" She founded the "inclusive shopping experience" site, naming it after her mom, Patti, and her cousin, Ricky.

"Ricky was unable to walk or talk, he greatly influenced my life and the way in which I saw disability," Connell tells Parents.com. "Ricky was one of the coolest teenagers ever! He taught me his wheelchair was not only his vehicle to get where he needed to go but also was a fashion accessory!"

Connell's mom, Patti, was diagnosed with a glioblastoma in 2006, and when she struggled to find fashionable medical supplies, she asked her daughter for help—and specifically for a leopard print cane. “Here she was, a CEO running a company out of the chemo center, and before I gave her the cane, everyone was talking to her like she was a baby just because she had lost her hair,” Connell explained to Babble. “Once I gave her the cane, it kind of changed the game. All of a sudden, I saw how powerful fashion could be. People were treating her the way she had always been treated—the way she should have always been treated.”

She had an "a-ha!" moment when she discovered a magnetic button-down shirt designed by a woman whose husband had Parkinson’s disease, and Connell explained that she realized a site like PATTI + RICKY was "something we needed. I couldn’t believe it didn’t exist already.”

Now, when she's considering which products to offer on PATTIandRICKY.com, Connell says she leans on what she believes Ricky's opinion of the item would be, as he was such a tastemaker. "We want to be the marketplace with “the cool factor; for kids with disAbilities," Connell explains.

Though the site also offers items for adults, their selection of products for kids is truly impressive, not to mention heartening. After all, something like BRAILLE’iant! braille-printed jewelry (a line of cute, useful gifts and accessories for individuals that are blind or visually impaired) or Abilities Adaptive Wear (adaptive clothing for children with feeding tubes, catheters, ostomies, and ports; sensory input "chewelry" for kids who fidget and chew; large-size onesies for older kids with developmental needs, etc.) could make in a child's life.

Overall, Patti + Ricky offers products from more than 50 designers that focus on fashion and function. Other cool offerings include Effortless Art learning products for all ages and abilities that are intuitive, inclusive, and environmentally conscious in design and Punkin Futz compression vests. On the site, you can also find cute shoes for kids who wear leg braces, colorful eye patches, and hearing aid and cochlear implant charms called "cuties."

"We want what people think of as 'medical accessories' to feel beautiful and funky and cool," Connell shared with Babble. Amazing! Through PATTI + RICKY her desire to do just that is being fully realized. 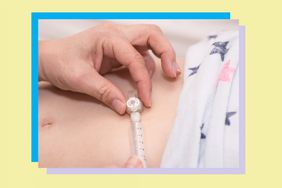 Do You Have a Tube-Fed Child? Here Are 5 Types of Supplies You Need ASAP