The fourth grader from SoCal hadn't been in the classroom for 358 days.

This time last year, the world came to a screeching halt, and kids of all ages moved from classrooms to online learning. Little did families know that the next 12 months would be filled with stops and starts, potential moves to hybrid learning, and a lot of heated discourse and politically charged arguments. Now, schools are beginning to reopen, even in Southern California, where in-person learning hasn't happened at public schools since the beginning of the pandemic. And one fourth grader's emotional reaction to the news is going viral.

In a clip shared on social media by an organization called Reopen CA Schools, a mom named Tarine Zanotto has her daughter Clara read homemade flashcards that tell the story of the past year—and ultimately break the news that after 358 days of remote learning, the fourth grader will be returning to a hybrid model that includes in-person learning at Redondo Beach School District in Redondo Beach, California.

Families Are Facing Unreasonable Distance Learning Expectations. Here's What to Do About It

Upon wrapping her head around the news, Clara bursts into tears. And it's tough not to do the same when you see her emotional reaction.

Tarine told Good Morning America that at first, she and her husband Mauricio were helping Clara with recorded lessons, and later, she learned independently with a live teacher on Zoom.

These Hilarious Cartoons Showcase the Reality of Distance Learning at Home

She did well with it, but it doesn't hurt that she loves school, her mom noted. "She was staying positive," Zanotto told GMA. "She was anxious at the beginning like most of us were in the beginning. She learned techniques to cope with her anxiety ... we went through therapy."

Although the debate over when to return to in-person learning has been contentious, no one would argue that the experience has taken an immense toll on kids' mental health. So, it's no wonder that seeing just how over-the-moon Clara is to get back to the classroom is bringing people so much joy.

Zanotto told GMA that the video of her daughter is "spreading the love." She also noted, "It was so cheerful to see the school alive last week. The sound of the little backpacks rolling and the kids giggling—that's everything." 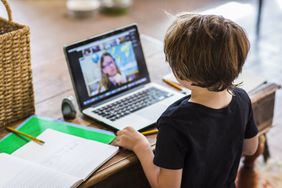 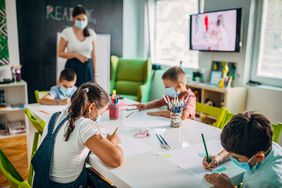