Brian Mazza and wife Chloe Melas-Mazza have been open about their difficult journey to parenthood through IVF. That’s why the fitness entrepreneur is now running to raise money for other hopeful parents’ fertility treatments.

Brian Mazza and Chloe Melas-Mazza had been trying to conceive for a little over year before the CNN New York-based entertainment reporter encouraged her husband to get checked out. Mazza, a fitness entrepreneur, admits he immediately became defensive. Being healthy and fit, he assumed there was no chance he could be the cause of their fertility issues.

"That was probably the biggest blow to my ego—that the doctor wanted me to go get my sperm checked," he says.

After running tests, doctors found Mazza had low sperm count, or when semen contains fewer sperm than normal and decreases the chance of egg fertilization. Male infertility issues are fairly common—research shows it is the cause in about half of all cases—but men are less likely than women to discuss their fertility issues. "I think a lot of men are insecure about it," says Mazza. "They maybe feel 'less of a man' and it's not something that's really brought up in the group of guys."

His willingness to get checked out is a reason the couple was able to welcome two children: Leo in 2017 and Luke in 2019. "These are my two miracle boys," says Mazza, a New York native. "I'm very thankful that my wife was very adamant about me getting checked."

He has since been using his platform to raise awareness for male infertility issues. To continue to do so, he will run 50 miles across New York City and through Westchester on December 12,while also raising money in partnership with the Ronald O. Perelman and Claudia Cohen Center for Reproductive Medicine at Weill Cornell Medicine to cover the cost of fertility treatments for those impacted by the COVID-19 pandemic. People have had to deal with fertility treatments being put on hold, clinics closing, and job loss making it hard to seek treatment to begin with. "I just felt like it would be great to give back, to raise money for families in need who don't either have the financial means or the health care to go through this process to conceive and have children," says Mazza.

Mazza and his wife, who have been married for six years, understand wholeheartedly how expensive and emotionally taxing fertility treatments can be after going through their own difficult journey to parenthood. While trying to conceive, Melas-Mazza also discovered she had low ovarian egg reserve, which is a premature decrease in egg number, and can be hereditary.

"I'm from the South and having babies and being a mom and a wife are just kind of ingrained in you subconsciously from an early age, so when I got married at 28, I just assumed I would be a mother shortly thereafter," says Melas-Mazza. "So when we started trying to get pregnant and it wasn't happening, I very quickly freaked out."

She went to her OB-GYN who told her to keep trying for a year. Eventually she went to a fertility clinic and underwent several unsuccessful intrauterine insemination (IUI) attempts. Unhappy with the first clinic's bedside manner, Melas-Mazza switched fertility doctors and opted for Weill Cornell Medicine. Doctors ran tests and confirmed Mazza's low sperm count and Melas-Mazza's fertility issue. "If I wanted to have more than one child," she was told, "I needed to do IVF and I needed to act quickly."

The following month the couple did their first cycle of in vitro fertilization (IVF) and it worked on the first try. Two years later, they went through the same process for their second child, and it again worked the first time. "It was really emotionally difficult on me especially the first time around with Leo," says Melas-Mazza. "I ended up having to see a psychiatrist because I wasn't handling the medication well … I was angry and bitter and resentful. I basically hated anybody that was pregnant around me or anybody I saw that was pregnant. I didn't want to go to baby showers. It was a really dark time."

The tough road is a big reason why the couple is so eager to speak out and encourage others through their struggle. For Mazza, that means helping to normalize male fertility issues. "I want guys to understand that this can happen to them, and you should get checked out," says Mazza. "Through science, you can have a family."

For Melas-Mazza, it also means helping others find comfort and not be discouraged by what they see on social media. "Everything may look rosy and happy on someone's Instagram, but that's really only a small window, a fraction, of the reality of someone's life," she says. She also points out how much she benefited from reading stories similar to hers while going through her journey.

"We're not saying that IVF is going to work for everybody, but when I was going through this, reading those stories provided me some peace and we just hope that we can provide that to an individual or a couple going through this," she adds. "We know it can be an incredibly isolating experience, but we hope that through talking about it we can destigmatize and normalize infertility for both men and women."

UPDATE: Mazza raised more than $64,000 during his "Run For A Chance" 50-mile ultra marathon and all the funds will go to the Ronald O. Perelman and Claudia Cohen Center for Reproductive Medicine of Weill Cornell Medicine in New York. Anyone can still donate to #RunForAChance here and can also apply for the grant here. 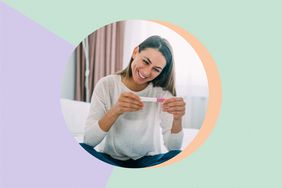