A dad took to Reddit to express how sad he was over his daughter's high school graduation and he's raising an important point about how we need to talk more about how fathers feel during these moments.

We talk a lot about the experience of parenting, particularly now, as we navigate a pandemic that's exposed so much about what is and isn't sustainable for people who are raising kids. But here's the thing: We tend to talk about specific aspects of parenting more than others. New parenthood-especially new motherhood-often takes center stage in discussions about raising kids (for good reaso -there's a lot wrapped up in becoming a mom, physically, mentally, emotionally).

But sometimes, we need to open up the floor for the parts of parenthood that aren't often talked about, like what fathers and parents of teens are up against. To that effect, a dad of a recent high school grad has started an important (and very, very sweet) conversation.

The father posted to Reddit to express how he's feeling as his daughter graduates high school. "I should be filled with joy AND I am! But I'm having a really tough time holding it together. In private, I can't stop sobbing," he writes.

"All I ever wanted to be as far back as I can remember, is a Dad. It is the best job in the world. And now it feels like it's ending," he continues. "Yes, I know it really isn't. My role as a Dad will be different but I will always be HER Dad. Still, I've been dreading this day for 18 years. In a little more than a month, she will be going off to college in another state."

And the dad wonders: Is it normal for him to feel so broken up about the thought of his child going to college and his role as her dad to change so drastically? "Is it normal for Dads to feel this way?" the father asks. There are many articles talking about moms feeling this way, but dads, he points out, "no so much."

He's right: There certainly are more resources and discussions out there geared toward moms. But one thing becomes very clear: This dad is not alone.

"I'm a dad, my daughter isn't even four and I'm already dreading that day," one fellow father commented. Another commenter added, "It's perfectly normal. Dads have emotions too. Never let any stereotype tell you how to deal with your kids."

Several moms weighed in as well. "I'm a mom and my daughter is only 6 months old and I'm crying right now thinking about the day she'll leave for college," she writes. "As a grown woman I can tell you there is no person that can ever replace a girl's dad. You take a special place in her heart no matter the physical distance between you."

All the comments make it abundantly clear that this dad's experience and feelings are not uncommon-and his post provides an important space for parents to normalize dads having strong emotional reactions, especially during the major moments in their kids' lives.

And as for the monumental role dads play in their children's lives? Sure, it changes over time, particularly as kids become adults, but it doesn't become any less important. One commenter puts it best: "You are mourning the end of one part of your life-that is ok and perfectly normal!" they write. "She will still need you for quite a while to come-college, jobs, dating, serious relationships, marriage, babies….all things that are possible in your future to help her out with." 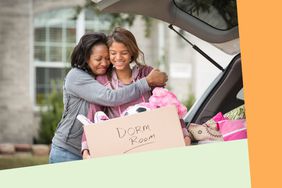