The thread called into question "birthday party invite etiquette" for little ones and their families. Parents consulted an expert.

Birthday parties can be an exciting time for both kids and parents, but getting the guest list down can sometimes be a challenge. So one mom reached out to Reddit for help knowing who she should invite to her son's upcoming birthday.

Mom lives with her son and husband in a small apartment, so she wanted to have a more intimate shindig with her son's closest friends. She let the invited kids' parents know all the details on social media.

But when her little one's first-grade teacher caught wind of the plans, she threw a major monkey-wrench into the situation—turning (what should have been) a small party into a huge headache. Here's what happened.

"[My son] and his friends were talking about [the party] in class because they were obviously excited, and his teacher overheard and sent me an email Monday afternoon basically telling me that the class rule for parties is similar to Valentine's…you have to invite the entire class," says the mom, who posts as u/SchoolThrow99876, wrote in the AITA subreddit.

Except Mom can't fit two dozen 6-year-olds into her small apartment. The teacher was less than empathetic, instead saying that she should rearrange the party's main details entirely.

How to Plan a Budget-Friendly Kids' Birthday Party

"She suggested I move the party to a nearby park instead," the mom continued. "I told her that there is no way I'm watching and feeding 25 children either and that I'd never heard of this rule."

But a rule is a rule, the teacher said, threatening to turn his behavior card to a "double red" if he didn't bring invitations for the class the next day—which would mean no recess.

Instead of seeing red at the threat of punishment, mom decided to play hooky with her kid. "I took him out for the day, and we had a blast getting ice cream, getting a happy meal, and picking out a small early birthday present," she wrote.

Another problem arose, however: Her husband wasn't a fan of the plan.

"While he agrees the rule is stupid, he basically called me a Karen for being so petty and having our son miss his education, that a day of missed recess isn't a big deal, and that he'd still get punished the next day (today, so we'll see)," she said. "Basically, [he was] telling me that my feelings are right but that all I did was hurt my child instead. I'm worried he has a point."

Mom turned to Redditors for their take—and most were Team Mom all the way. While the uninvited kids may feel left out, many felt that the poster did what she could to minimize hurt feelings by inviting people on social media rather than at school.

"All they were doing at school was talking about the party, not handing out invitations," noted one Redditor, who mentioned they were also a teacher. "[It] wasn't the teacher's place to say anything. And moving a kid on a behavior chart to double red is NOT an appropriate consequence for not inviting the whole class…That's just an abuse of power."

"Remind [school administrators] that neither she nor the school can dictate what you do outside of school, and you don't appreciate her retaliatory behavior towards your son, who has no control over the situation," wrote one commenter.

And some Redditors weren't a fan of Dad's take on the situation either. "In the long run, your child knowing that they are loved is far more important than a day of missed school," someone commented.

What an Expert Thinks

The Redditors' verdict was clear: Mom is right, and the teacher was wrong. But playing devil's advocate: Even if she did invite kids on social media, some classmates might have felt excluded when they heard about the party. But are you always obligated to invite every child, just so they might not feel left out? And what about skipping school?

To answer those questions, Parents turned to Karen Aronian, Ed.D., a New York-based parenting and education expert, for advice.

"It's not like the child went in and passed out invites in front of other people. They didn't call any attention to it," Dr. Aronian explains. She adds that the teacher was most definitely overreacting—and handled the situation unprofessionally. An administrator should have been present for the conversations, she explains.

However, Dr. Aronian was lukewarm on Mom's decision to let her kid skip school, particularly without talking with Dad first. "There could have been a conversation that proceeded the conversation with the father, a school administrator or counselor and teacher, before taking action [and skipping school]," she said.

So there you have it: Invite who you want to invite, but communicate, particularly with your co-parent, before taking more drastic action like cutting school with your kid, even if your heart is in the right place. 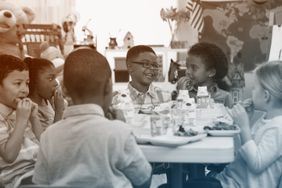 Threatening to Shorten School Lunchtime Should Never Be Used as Punishment, Yet It Is 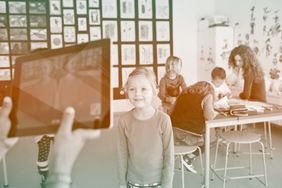 Is It Legal for a Teacher to Livestream a Classroom?