Dads may think they're doing more now that many are home due to social distancing guidelines, but it's still mostly moms doing the heavy lifting of household chores and distance learning.

Surprising no mom anywhere, it turns out that moms are doing most of the heavy lifting when it comes to housework, child care, and managing their kid's virtual schooling during coronavirus quarantine. Two recently released surveys found that in heterosexual couples, it's the moms who are facilitating the video classes, Google Classroom assignments, and teacher communications, on top of cooking, cleaning, laundry, and taking care of the kids–basically doing it all.

One of the surveys, performed by national parent-led nonprofit ParentsTogether, found that of 1500 parents surveyed, 78 percent of mothers with a male co-parent are managing the majority of school-related tasks and 73 percent of single moms feel that trying to balance it all is driving them to their breaking points.

“Every parent with kids at home is doing a heroic–and impossible–job right now. But the evidence is now clear that moms disproportionately are getting crushed by the extra load of managing their children’s distance learning,” said Bethany Robertson, the co-founder and co-director of ParentsTogether in a press release for the survey. “Parents, and moms especially, are telling us that, as a country, we can’t keep asking them to be both employees and full-time caregivers. Parents need financial relief, paid leave, and workplace flexibility.”

The second survey, from Ball State University, contains similar findings: moms are doing most of the work. The study found that while dads think they're contributing more than they did before stay-home-orders, moms don't agree with that assessment. Forty-eight percent of dads say they've taken a more active role in housework, but only 25 percent of women say their male partners are helping out more.

Researchers suggest that dads may only think they're doing more, however.

“Greater exposure to domestic work may also lead fathers to perceive that they are spending more time in these tasks than they actually are,” said researcher Richard Petts, a Ball State sociology professor in a statement, although he notes this isn't the case in every household.

“There is the potential for the COVID-19 pandemic to alter gendered divisions of labor if fathers remain more engaged in the home once shelter-in-place orders are lifted and children go back to school," he says. "Whether increased sharing of housework and child care will persist remains to be seen.” 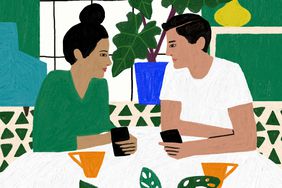 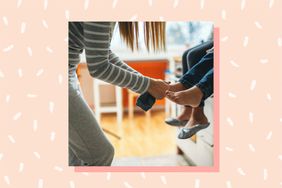