A new study sheds light on how ancestral exposure to smoking can be seen four generations later, prompting many questions about how to better understand health and wellness.

We've long known that smoking during pregnancy carries a grab bag of dangerous risks for both parent and baby that can include preterm birth, low birth weight, and Sudden Infant Death Syndrome, to name a few. But until now, the research has mainly focused on how smoking can negatively impact pregnant people and their growing babies. In a first of its kind, a new study shows that the adverse health effects of tobacco may linger through multiple generations in some surprising ways.

According to a new study published on Nature, researchers looked closely at data from the Avon Longitudinal Study of Parents and Children, famously known as the 'Children of the 90s study.' This study observed pregnant cisgender women and their families during the 1990s. In 2014, researchers mined that data and discovered that cisgender male boys whose fathers began smoking tobacco before puberty had an increased likelihood of developing a higher body mass index (BMI) that included whole-body fat mass. But that study only showed a link between a parent and child—two generations.

Another Scary Reason to Quit Smoking During Pregnancy

Further study into this fascinating data now shows that ancestral exposure to tobacco can be detected in as many as four generations into the future. But it gets a little complicated. The original findings were between fathers and sons, but new data points to how a paternal grandfathers' exposure to tobacco can negatively impact their great-granddaughters.

"We now show that if the paternal grandfather had started smoking pre-puberty, compared with later in childhood (13–16 years), his granddaughters, but not grandsons, had evidence of excess fat mass at two ages [17 and 24 years of age]," the researchers wrote in their published findings. "When fathers of maternal grandfathers had started smoking pre-puberty, their great-granddaughters, but not great-grandsons, had excess body fat."

So Long, Cigarettes: How To Quit Smoking

There have been many studies on obesity, and one thing that researchers all say to be true is that obesity is complex and little understood. Many scientists believe that a combination of genetics and environment may cause or encourage obesity to develop in a person, and research like this new study may help fill in some missing pieces to that puzzle.

Remember, the official advice from the American College of Obstetrics and Gynecology focuses on how the health of the pregnant person as it directly impacts the health of a fetus. But now, it seems that ancestral exposures to things like tobacco and perhaps other things such as famine, trauma, addiction, etc., may also play a critical role in the health of today and tomorrow's generation of kids.

Professor Jean Golding, who led the research, told the University of Bristol, "This research provides us with two important results. First, that before puberty, exposure of a boy to particular substances might have an effect on generations that follow him. Second, one of the reasons why children become overweight may be not so much to do with their current diet and exercise, rather than the lifestyle of their ancestors or the persistence of associated factors over the years."

So, what does this mean? First, it is important to remember that although this new research is exciting, particularly if it can help us gain better insight into the impact of generational trauma from things like addiction, abuse, and poverty, that doesn't mean that parents should be worried if grandpa smoked cigarettes when he was 10 years old.

Pregnancy is already stressful enough; adding new fears won't help anyone, least of all your beautiful baby. But thinking about how our choices today can impact future generations is a great reason to think about how we treat our minds, bodies, and spirits here and now.

If you are a smoker and pregnant or trying to conceive, it is vital to quit smoking. You can learn more about how smoking can harm you and your growing fetus by reading more here. If you need help quitting, reach out for help from the CDC here. 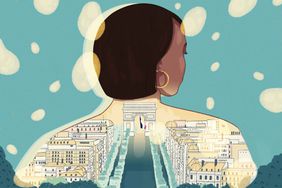