The internet is buzzing about whether CoComelon is overstimulating for young kids. But what does an expert have to say?

Screen time can be a touchy subject. Some parents have strict rules about whether or not they allow their children to use screens—and whether or not there are time limits or other restrictions if they do. Others are more lenient. Experts err on the stricter side, with the American Academy of Pediatrics (AAP), for example, advising against screen time for children under 18 months (except for video chatting) and an hour max of high-quality programming for children 2 and older.

But digging deeper, does the pacing of the shows you choose for your kids matter? There are slow-paced shows like Mister Rogers' Neighborhood, which many parents of young children watched themselves as kids, and the more modern Daniel Tiger. And then there's…CoComelon.

CoComelon will have the sounds of constant giggling and repetitive nursery rhyme-style jams about manners, bathtime, and everything in between stuck in your head for days. But it seems that kids are obsessed, and you love seeing your child happy. You may also need some time to make dinner or just a good old-fashioned break, and screen time can help make that happen.

The problem? Some people think children may love CoComelon a bit too much. A TikTok video from user @circusbrain compared the show's pace to other popular programs like My Little Pony. In the examples from My Little Pony, the scenes change every four to six seconds. Cocomelon's changed every one to three seconds. In a follow-up video, @circusbrain also demonstrated how nearly every shot in CoComelon moves.

It's unclear what @circusbrain's credentials are (though he has "psych" and "Ed," in his bio, which typically stands for psychology or psychiatry and education). Regardless, one parent saw the clip and took to Reddit to dig for more info.

"I recently saw a TikTok about how CoComelon is overstimulating for babies and is like 'crack' for them," wrote u/First_Regret9418 in the Parenting subreddit. "They say it's because of how fast the scenes change. Does anyone have any more info on this?"

More than 300 Redditors chimed in. They didn't have any peer-reviewed studies to share, but they had a ton of anecdotes about ways fast-paced programs affected their kids.

"The most epic meltdown we had was while shutting off [CoComelon] to get her ready for her bath. It was on another level. I said right there and then that the show is banned in the house," wrote the top commenter.

"I had to ban Paw Patrol for this reason. Turning it off would create some seriously genuine heartbreak and terror, even if I warned it was coming, set a timer, etc. It was seriously like he was addicted," said another.

But others hadn't noticed changes in their kids.

"My toddler doesn't zonk out to that stuff. It sometimes plays in the background while he plays or draws," one person said.

The research is also mixed. In 2011, researchers found that watching nine minutes of fast-paced programming could impair a child's executive function, which is the set of cognitive skills needed for self-control and behavior management. But in 2015, the same researcher, Angeline Lillard, a developmental psychologist at the University of Virginia, conducted another study. This time, the team concluded it was the "fantastical content" of shows, not their pace, that was an issue. In both studies, the effects were short-term.

And a pediatrician, who goes by @pedsdoctalk on TikTok, posted a video stating she doesn't think CoComelon is harmful in moderation.

So, which is it? Clearly, it's unclear.

"Without empirical research on the show CoComelon, there is no data to substantiate claims that this show is overstimulating due to the pace of the scenes," says Rebecca G. Cowan, Ph.D., a professor in the college of social and behavioral sciences at Walden University.

Dr. Cowan believes the key, like many aspects of parenting, is to monitor and know your child.

"Not every child will respond to shows such as CoComelon in the same way," she says, adding that there is no "magical age" when a child can graduate to faster-paced programming. "Pay attention to how your child is responding, and if they appear overstimulated or distressed, intervene if you feel it is necessary."

Dr. Cowan says signs the child is overstimulated include crying, anger, and appearing tired or cranky.

If your child is overstimulated and upset when the show is over or screen time is up, parents can help them navigate the issue by:

At the end of the day, regardless of what TikTok or Reddit says, parents are the experts on their children. They know their preferences and the red flags that something is about to go awry.

Parents Trying to Limit Kids' Screen Time Should Start With Their Own
Was this page helpful?
Thanks for your feedback!
Tell us why!
Related Articles 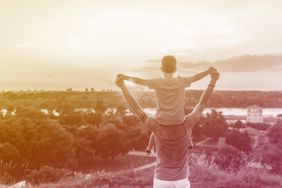 6 Ways to Raise a Successful Child