The latest TikTok challenge is a cause for concern. Here's what parents need to know and how to talk to kids about it.

With that option for going viral off the table, TikTokers are now resorting to something else. And this viral trend is even worse, as it involves hurting someone else—mainly, teachers, who have enough to deal with these days.

It's called the Slap a Teacher Challenge, and it's pretty self-explanatory, unfortunately. Students will calmly approach a teacher and slap them. You may ask, "Isn't that against school rules?" Yes, yes, it is. In fact, slapping a teacher qualifies as assault.

The good news is that the challenge hasn't caught on quite yet—mostly because it's scheduled to begin October 1. But school officials and teachers unions around the country are already sounding the alarm.

The Broward County Teachers Union sent out an email Wednesday warning members about the challenge and asking teachers to look out for one another, according to Local 10 News in Florida. The union also encouraged members to report any incidents to local police and press charges against the student who slapped them and the one who filmed it.

In San Antonio, IDEA Carver College Preparatory School sent text messages to parents warning that participation in the challenge will have serious consequences, according to a report by San Antonio Express-News. Officials at New Britain High School in Connecticut said the same in an email to parents obtained by WHEC-TV in Rochester, New York. Officials warned that students participating could face expulsion and arrest.

The Slap a Teacher challenge isn't the first TikTok trend that's targeted schools. In September, some students began participating in a "devious licks" challenge, stealing items like soap dispensers from school bathrooms and bragging about it on social media.

TikTok users may be gearing up for the latest challenge, but Twitter is unimpressed. In many cases, users are rightfully outraged. One encouraged students to use their time more productively.

"Just got an email about a new @tiktok_us challenge: Slap a teacher. Really? How is this okay? Instead of encouraging criminality—how about a submit your assignments challenge? Read a book challenge? Educate yourself and rise up challenge?" the person wrote.

And another got right to the point. "'Slap a teacher' Tik Tok challenge is assault. Talk to your children now," tweeted another.

Back when the Milk Crate challenge was a thing, Parents spoke to health care providers about how to talk to children about unsafe social media trends. Nkeiruka Orajiaka, M.D., emergency medicine physician at Nationwide Children's Hospital, reminded people that children's brains are still developing. "Developmentally, kids and younger teens do not have their frontal lobe, a part of the brain, fully developed yet," she explained in August. "This is the part of the brain that processes consequences of an action before undertaking the action. That means they are more likely to jump into trends without thinking or considering any potential harm."

But that's not an excuse to engage in dangerous behavior or hurt someone else. Dr. Orajiaka suggested parents talk to their children about emerging trends and have conversations about safety and social media use.

"Parents can also have ongoing conversations with their kids about different make-up scenarios and what they would do in these situations," she said. 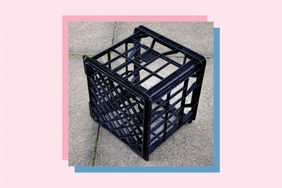