Two episodes into the Sex and the City reboot, and I couldn't help but wonder: What's wrong with Miranda and Charlotte? These friends were never perfect role models, but I didn't expect to see so many parenting red flags. (Spoilers ahead.)

I really, really wanted to love the Sex and the City reboot, And Just Like That, and get reacquainted with a fantasy version of New York life, where someone with my skill set lives in a fabulous Manhattan apartment with a bedroom-sized space dedicated to her shoes—instead of driving a suburban carpool in a Kia on a Saturday night.

But the thing that really drove me crazy about the Sex and the City reboot wasn't the absence of Samantha or the other BIG sad revelation. It was the epically bad parenting on display right from the get-go—that had me tossing and turning at 2 a.m.

You barely got a few minutes in before it started, with Miranda complaining about stepping on used condoms her son Brady leaves lying around his bedroom from the apparently nonstop sex he's having with his girlfriend, Louisa.

Side note: I couldn't help but wonder—who is Louisa's mystery mom, and why doesn't she care that her daughter has apparently moved into another family's home to have loud and extremely energetic sex with her teenage boyfriend?

It was all I could do to not yell at the screen, "Set some boundaries already, Miranda." Like—maybe don't let Brady's girlfriend sleepover if you're not comfortable with it? Even the coolest moms I know would definitely nip that in the bud.

But flinging used condoms around his room wasn't all Brady was up to—he also decided a child's piano recital was the perfect place to make out with his girlfriend, and smoking pot at a family friend's funeral with a random person he just met is A-OK. With Brady failing to display a single redeeming trait (other than, I guess, really liking his girlfriend), I couldn't help but wonder—were Miranda and Steve spending too much time at Steve's bar? (Spoiler alert: It seems like Miranda definitely has been.)

And Charlotte? Well, she is clearly carrying some serious emotional baggage in her relationships with her two daughters.

Charlotte forced her teen daughter Rose to wear an Oscar de la Renta floral dress that coordinated with the rest of the family, in a snobby, Park Avenue version of family Christmas pajamas. And not only is she disapproving of Rose's perfectly benign skateboarding hobby—she seems mad that her husband is supporting it by skateboarding with her. I'm seeing the inklings of perhaps some gender fluidity there that's clearly going to rub Charlotte the wrong way, but at least Harry seems like he'll handle it better.

I'm even more worried about the weird dynamic with Lily, her daughter who was adopted from China. The main thrust of Charlotte and Lily's major conversation in the first episode was all about who rescued who in their relationship. That's the kind of adoption conversation you have with a stranger who awkwardly congratulates your daughter on how "lucky" she is to be adopted—not the kind of conversation you have about adoption with your daughter of 17 years. (As my 17-year-old daughter, who was adopted from China at around the same time as Lily would have been, quipped, "All we talk about is my college applications.")

As any adoptive family will tell you, adoption will always be part of the story—but it's nowhere near the whole story. It definitely seems off that adoption would come up in daily conversation between them, and that Lily seems to feel somehow beholden to this family for "rescuing" her. Adoption (and some pretty incredible piano playing) shouldn't be defining Lily's whole character.

Miranda and Charlotte aren't exactly the mothers of the year—but honestly, this perfectly imperfect group of friends has never exactly been role models for the right way to do anything but accessorize. Just like us, they're struggling, they're flawed—and hopefully, over the next few episodes, they're growing into the better moms they can be. (Even if it might be a little too late to correct some behaviors with poor Brady.)

Bluey's Mom Gives Me Permission To Be an Introverted Parent 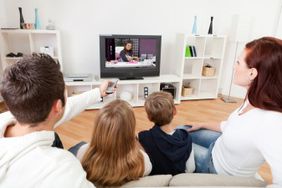 What Happened to Moms? How Dads Became the New TV Role Models