Sometimes kids come up with interesting names for their stuffies and dolls, and sometimes we have to tell them not to say those names in public.

Kids say the darnedest things. My son recently told me he was going to hug my pee. Um, OK. My daughter once asked if I wanted some "cock soup" from her play kitchen. Also, kids name their dolls and stuffies some seriously hilarious, yet wildly inappropriate things, and as parents, let's just embrace their innocence and get in a good laugh. What do you say? Because soon they'll be all grown up and have to adult at Zoom meetings, acting super appropriate 24/7. Snooze.

Over on Reddit, a parent started out a thread about inappropriate names for toys by sharing that their daughter calls her doll—brace yourselves—"stinky Jesus butt." Pause for reaction. The original poster went on to detail about her little darling, "She doesn't even think it's funny, just calls it that name. And now mentions her doll all of the time by the name. 'Go to sleep stinky Jesus butt.'"

"My kid named a lovely stuffed animal 'Nard,'" another parent confessed, prompting this mom over here to Google what that word means and—oh, that's funny.

"My kid called a doll 'tampon,'" someone else said, while many other parents admitted that their kids have named dollies after genitalia and related terms, ranging from the clinical to the more crass. Case in point, one commenter shared, "When we were young, my sister and I named a goldfish Pecker."

Of course, as parents we wonder where our kids came up with this stuff. After being a mom for the past 13 years, I'm convinced it's pretty random, although, perhaps they overhear stuff and just regurgitate it when we least expect it but they don't know what they're saying!

So, I'll just go back to suggesting we laugh at what our kids say. Adulting plus parenting is exhausting and stressful and if one day my son announced his new concrete mixer would now be named "fuc* truck," well, I'm going to call my husband into the room, and we're going to ask him to tell us again. And again. But maybe that's just us. 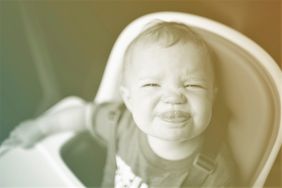 These Are the Most Annoying Baby Nicknames, According to Reddit