Dad seems to think his kid's long hair is too 'girly.' We hope he gets his insecurities in check.

In 2022, there's no such thing as a hair don't, as long as the person who's rocking the hairdo likes the way it looks.

And yes, this applies to how short or long a person's hair is, regardless of gender. Unfortunately, not everyone has received the memo, including one Redditor's husband. She took to Reddit for a vent session.

"My 3-year-old son has long hair," wrote u/asdfkjhg1220 in the Parenting subreddit. "He doesn't want to have it cut, and I respect that."

The original poster (OP) has sent her son and husband to get haircuts together, but the kid just isn't into it. To keep it out of his face, she puts her son's hair in a ponytail, bun, or braid. Sounds consensual and logical, right?

"My DH (dear husband) is not a big fan and tells him he 'looks like a little pretty girl,'" OP wrote. "I hate these comments as I don't understand why hair determines gender. My hair is short. Does that mean I am a boy?"

The length of a person's hair has nothing to do with their sexuality either. And who cares if the kid is gay?

Lucky for the child, he has a mom who understands that.

"I just honestly don't care as long as he is happy with who he is, and he was so happy with his…hair like my friend XYZ," Mom said.

But her husband isn't happy and thinks the child will get made fun of. The problem? None of the kids in daycare care, according to the mom. At this point, she's understandably fed up and at a loss as to how to handle the situation. She turned to Reddit for advice.

Fourth-Grader Called Out by Teacher for Long Hair, Highlighting Double-Standard for Boys

More than 100 people have already chimed in.

"Try pointing out that children are not born cruel, and they learn it when the adults in their life model it for them like he is doing for your son with his cruel comments," the top commenter clapped back.

But another commenter pointed out that the child may get made fun of as he grows up. That doesn't mean he needs to change who he is, though.

"Let your little boy be who he wants to be…your DH is definitely in the wrong for those comments. He's not wrong when he says he will be bullied and made fun of for it…Kids can be terrible people. Instead of joining their side and beating down his self-confidence, he should be teaching him skills to cope with what will happen and how to be himself regardless of what people say," the person replied.

And one person pointed out that it's not that uncommon for a guy to have long hair.

"Lots of 'manly' men have long hair, so the 'looks like a girl' comparison falls apart before we even get to hair doesn't have a gender…'Jungle Boy' Jack Perry has beautiful long curly hair, and he's one of the best young wrestlers around. Your husband feels insecure in his own masculinity, and he's taking this insecurity out on your son. He needs to keep those comments to himself. If you can't say something nice, don't say anything at all," the person said.

People, it's just hair. No length can confirm or deny one's identity, but it can affirm who they are. Normalize telling people they look great or not saying anything at all. 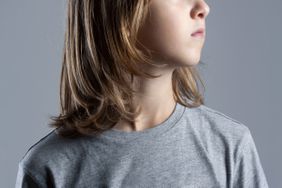