The frustrated mom of a strong-willed 4-year-old girl shared, "I had no idea how to reach her, and for the first time in both her and my life, we connected."

When it comes to dealing with your child's behavioral challenges, it can be an uphill battle to pinpoint the cause and, by extension, the best solution. But for one mom facing nonstop conflict with her 4-year-old, a simple evening spent one-on-one made a world of difference.

And the experience inspired her to take to Reddit to encourage other parents to carve out special times with their children. The lessons she learned would be helpful to anyone raising a child, and could help you grow closer to your own kids.

Writing under the handle BloodErinyes, the mom took to the Parenting subreddit in 2018 to explain that "something amazing" had just happened to her. "I have a 4-year-old daughter who I've been fighting with everyday for the last two years," she shared. "I'm always the disciplinarian in our house, so she's always been 'daddy's girl.' When I say fighting I literally mean hour-long tantrums, because she doesn't want to brush her teeth because brushing teeth is 'too hard,' or screaming because she doesn't want to get dressed, or eat dinner, or go to school, or do chores. Literally any of that."

The poster said that her daughter had been "getting in trouble at school, hitting other kids. She's been bullied and been one to bully back; she's not sharing and not really getting along with anyone."

At the same time, "NOTHING I say gets through to her no amount of talking, empathy, punishment, sympathy—nothing has helped!" she vented. "I've even asked the teacher to contact the school counselor to ask about therapy for all of us or just her; or if they could recommend a professional outside of the school system anything!"

Then, a miracle. That night, her husband had two tickets to see a baseball game and decided to take their son. He suggested that his wife and daughter have a girls' night, something they'd never done before. "Immediately, my daughter JUMPED on the idea and asked if it was just me and her and if we could do whatever we want," the OP wrote. "The boys left, and I have NEVER had SO MUCH fun with just my daughter and I. I told her tonight was about doing whatever we wanted."

The mother-daughter pair "went and got our favorite take out for dinner, set up all our drinks and snack, and I gave her full reign of the remote. We ended up cuddling with a big cozy blanket and binge-watching the entire series of the new She-Ra on Netflix and had a blast!"

Is It Ever OK to Exclude One Child From an Activity in the Name of Bonding?

At the end of the evening, OP told her daughter "it was time to brush her teeth." After taking a beat to think it over, the girl replied, "OK, Mommy!"

"Not only was there no tantrum, but she ended up FLOSSING her teeth AND brushing them," her mom wrote. "I'm literally sitting here crying because I was terrified that I was raising an apathetic child that would grow up to be selfish and a terrible person, who was always angry."

"I was at my wit's end. I had no idea how to reach her and for the first time in both her and my life we connected. We did something together and we loved it. I'm not sure what this means, but I can FEEL that this is going to help BOTH of us; and that she won't grow up to be unkind. I feel so dumb for not doing this with her sooner, but I'm so happy that we did this, because I know it's a step in the right direction."

The post garnered over 2k upvotes and over 100 comments, almost all of them words of support from other parents. u/RiotGirlHeather noted, "I love this so much! I need to do this with my very strong-willed 5-year-old girl before the new baby gets here. Maybe she and I will get along better. She too is a 'Daddy's Girl.'"

u/Emotional_Nebula agreed. "My daughter is almost 4, bright, and strong-willed," they said. "I've found that when she is being particularly difficult, I can sort of 'reset' her by just doing something with her that she loves (doesn't really matter what) and giving her my undivided attention for 30 minutes or so. Her attitude totally shifts. I learned this by simple trial and error."

A Redditor going by the handle ScoldingCupid confirmed that one-on-one time is valuable, adding that it "works for anyone with multiple kids."

"I have three boys (5 years and twins 3.5)," they wrote. "Some solo attention once a week has really helped with our relationships, and behavior seems to be a little more mellowed out. We use it as a reward at the end of the week. Not one they can lose, but one they have to earn with good manners and helping when we ask. We have so much fun. Ice cream dates. Home Depot activity days. Jump houses. Or just going to the library and reading for an hour or so. These are the moments they will remember."

How to Spend More Quality Time With Your Child

The OP later posted a follow-up for her fellow Redditors: "First of all I want to thank you all for the encouragement and advice you've given!" she wrote. "I've downloaded and joined a TON of podcasts for raising strong-willed children and other books recommended to me! I will definitely be changing tactics here for her and myself, and I'm just so thankful for all of your help."

Props to this mom and others for prioritizing one-on-one time with their kids. Judging from their experiences, a little really does go a long way. 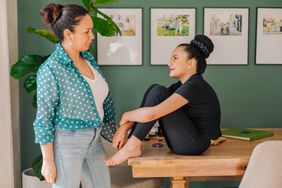