Some parents are clapping back at photo companies that erase scarring, freckles, and even braces in school portraits (sometimes without asking families first). But others like having the option for a touch-up.

Parents often look for ways to downplay physical appearance with their kids and show them that beauty isn't simply skin-deep.

Jennifer Greene, a 43-year-old mom from Maryland, was outraged when her 12-year-old daughter, Madeline, came home with pricing information from a photography company called Lifetouch. The package urged parents to spend $12 on retouching their child's school photos.

"I was shocked," Greene recently told New York Post. "I completely disagree with [retouching a child's school picture], because it's teaching kids that they need to look perfect all the time and that they can change [a perceived flaw] with the click of a mouse."

"I'm going to need someone to explain to me why @Lifetouch offers PHOTO RETOUCH for KIDS school pics?! What the hell?!" Greene tweeted.

The comments were mixed, though. Some agreed with Greene.

"[I] think kids should be able to see their scars, braces, or freckles. Why tell them these are things to be hidden?" read one response, in part.

"I received my daughter's package to purchase and found this disturbing as well. My daughter is a senior in HS, and I feel it's disgusting to try and tell them that they're not okay the way they are," replied another. The user also posted a screenshot of the package, which included options to remove features like a child's braces, facial retouching, and scar or jewelry removal.

But others didn't mind having the option for a photo retouch.

"Just because you don't agree with retouching doesn't mean other parents can't agree with it… let others choose the option if they want it," said one person.

"I can tell you why. My son got scratched by his cat on his cheek a few days before picture day. I wish we…had this option. Now he's embarrassed every time he sees that picture on our fridge and at his aunt's house. What about his feelings about that?" wrote another.

With the debate heating up, one Twitter user who says he's a former photographer offered a middle ground.

"I understand where you're coming from. My policy when retouching kids was to remove things that weren't normal parts of a kid's features (pimples, scratches, bruises, etc.). All else stays unless requested," he wrote. Greene replied that she agreed with that approach.

Greene isn't alone, though. Last year, another mom shared a side-by-side of her child's photos. In one, from the spring, the kid had cute freckles. In the other, Lifetouch had edited them out without her permission (She told New York Post the company rectified it by resending untouched photos.) And another mom on TikTok lamented an editor removed her son's hearing aids from his school snap.

Photos—and how they play into body image issues—have made headlines recently. In October, former Facebook employee Frances Haugen revealed that the company, now called Meta, had internal research showing that Instagram made teenagers feel worse about their bodies.

Parents can work with their children on body image issues and prevent them with a few expert-backed tips: 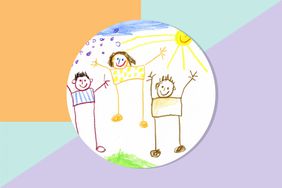