The photographer, whose almost four-month-old has been struggling with feeding, wanted to send the message that "fed is best." Three moms who feed their L.O.s by tube stepped up to the plate.

No matter how you feed your baby—whether by breast, bottle or, in some cases, tube—you're never immune from mom-shaming. The truth is, there's no right way to feed your baby and instead of spouting mantras like "breast is best," it's never been more important to spread the word that truly "fed is best."

That was the thinking behind a beautiful viral photo series shot by Anna Stacy Poteet, a photographer based in Chattanooga, Tennessee. "The idea was to gather moms together and show the world that no matter how your baby is fed, whether it being breastfed, formula-fed, tube-fed, you should be accepted," Poteet says.

The mom of a nearly four-month-old says she recently became passionate about feeding, because her little one has "troubles of his own eating and gaining weight." Inspired to celebrate moms and their babies, no matter how they're fed, Poteet took to Facebook for a model call. "I actually got a bit nervous the night before and commented back to each one asking if they were going to come, thinking nobody was going to show up," she shares.

Ultimately, three moms, all of whom have children who take their meals through feeding tubes, made it to the shoot.

Brianna Lorenzo is a mom to 2-year-old son Bellamy, who "is about the size of the average 1-year-old and is considered failure to thrive, due to being an overly picky eater," Lorenzo explains. "He also has allergies and acid reflux, which make his tummy hurt after eating. After trying food therapy, calorie drinks, and many other methods for many months, he ended up needing a G-tube. In just three weeks, he has already gained three pounds. He is now thriving instead of surviving."

Samantha Parsons brought her five-month-old Hailey aka "Bug." "She was born full-term, but from the get-go had issues with nursing and even taking a bottle," Parsons shares. "When weeks led into months of her not eating right— due to improper swallow, and dairy, soy and coconut allergies, and reflux—failing a swallow study, then a severe case of oral thrush and ultimately failing to thrive, she had a nasal tube inserted. She gets fed by pump continuously into her intestine rather than stomach, because she has a history of aspirating."

Parsons explains that her L.O. has failed a second swallow study, so they're working with Vanderbilt Hospital in Nashville to do more testing "to find out the cause of her swallow problems." They're also "working with feeding therapy to encourage her to learn how to eat and drink eventually and will be adding physical therapy to the list, too."

"Our journey is just beginning and we have a long way to go, but she's a fighter," Parsons says.

Lizz Hendrickson and her six-month-old daughter Katherine, who is grinning from ear to ear, also participated in the shoot. "Since birth she has had difficulties with swallowing and severe reflux," Hendrickson explains. "She struggled with constant vomiting, leading to poor weight gain. When she was three months old, the doctors placed a feeding tube through her nose, down into her small intestine. At this point, Katherine was taking no food by mouth. For the next two months, she was fed at a slow rate over 20 hours a day." Thankfully, the L.O. began to gain weight, and soon, her care team's focus shifted to managing her reflux and improve her swallowing abilities. She's now being treated at Vanderbilt, as well.

"With an amazing medical team, we have made huge strides in her health," Hendrickson says. "Thanks to a surgery called a Nissen fundoplication, her reflux is now managed and she is off all medications. This was a very intense surgery with lifelong side effects: some of which being the inability to vomit or burp. She is now thriving with her G-tube and is going to be mobile before we know it! Her swallow reflux is improving and she is loving being able to eat baby food! She is definitely the happiest baby I know."

Poteet is endlessly grateful to these inspiring tube-feeding mamas. She notes, "My heart goes out to these parents who deal with this lifestyle daily, and I am so thankful to be able to bring some awareness to this." So far, her post featuring the images has been shared over 7.7K times. 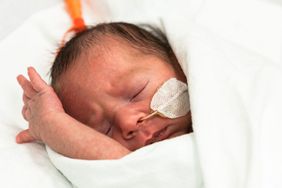