In a new PSA, actor Paul Rudd explains so eloquently why millennials need to wear a mask during the COVID-19 pandemic. But in case you don't understand a word he said, we gotchu, mom and dad fam.

Thanks to unnecessary politicizing and inconsistent messaging, plenty of people are still failing to wear masks, even though scientific research shows that widespread wearing of face coverings, paired with practicing social distancing and frequent hand-washing, would greatly reduce community transmission of COVID-19. That's why "certified young person" Paul Rudd has taken it upon himself to urge young people to mask up.

How to Wear a Face Mask Properly

The seemingly ageless (but actually 51-year-old) actor was recruited by New York Governor Andrew Cuomo to appear in a now-viral PSA, which is part of his national "Mask Up America" Campaign, encouraging all Americans to wear a mask. "This nation is still battling the COVID-19 pandemic and young people are not immune from it," Governor Cuomo said. "We all need to do our part and wear a mask. Thanks to Paul Rudd for helping us spread this crucial message and reach young people like him."

In the clip, Rudd says, "A few days ago I was talking on the iPhone with my homie Governor Cuomo and he's just going off about how us millennials need to wear masks because, get this, apparently a lot of COVID is transmitted by us millennials. So Cuomes asks me, he's like, 'Paul, you’ve got to help. What are you, like, 26?' And I didn't correct him."

Going on to do his best impression of a neo-Travis from Clueless, Rudd drops various, Gen Z-originated phrases that might have some parents—many of whom are actually millennials themselves or perhaps slightly older Gen X'ers—scratching their heads. (Wait, is "beast" the new "fire"? What?)

Let us breakdown all hilariously dorky lingo. Why? Because we've got you, fam.

Rudd says that "apparently, a lot of COVID is transmitted by us millennials—no cap!" In other words, "not lying" or "no lie."

Rudd addresses viewers as "fam." No, you don't have to be actually related to someone to call them this. It's anyone you're close with—friends, family, Instagram followers...

How to Wear a Face Mask Properly

"Masks are totally beast!" exclaims the Living With Yourself star. "Beast" translates to "good." It can also be used to refer to being talented or skilled ("She did the #CaptainHookChallenge the other day and was a beast!") but in this context, it's just straight-up "good."

Twitch is a video live streaming platform featuring streams on anything from cooking to music to Q&A sessions and—the leading driver of traffic—video games.

This is a "spontaneous and usually random time where someone checks your vibe." It's basically the updated version of a check-in from a friend, according to Urban Dictionary.

Rudd calls Billie Eilish and says he "stans" her. A reference to the central character featured in Eminem's song of the same name, to "stan" someone is to look up to or idolize them.

A term of endearment for a loved one, "bae" is also thought to stand for "before anyone else."

Dank is another way to say "cool" or "awesome," while squad is of course a group of friends—or, you know, formidable politicians like "The Squad" that's made up of four women elected in the 2018 U.S. House of Representatives elections: Alexandria Ocasio-Cortez of New York, Ilhan Omar of Minnesota, Ayanna Pressley of Massachusetts, and Rashida Tlaib of Michigan).

Referring to TikTok dances and trends, which are often hashtagged on the app as challenges (e.g. #CeleblookalikeChallenge, #FliptheSwitchChallenge), Rudd jokes that young people should be focusing on the challenge of slowing the spread of COVID-19.

At the end of the clip, Rudd says, "We've gotta yeet this virus." To "yeet" something is to discard something—especially at high velocity, according to Urban Dictionary.

The video ends with a masked Paul Rudd and Sean Evans in a spoof episode of the YouTube series "Hot Ones," a show where Evans interviews celebrities while they eat chicken wings covered in hot sauce. The joke here references a popular TikTok audio featuring Rudd's famous "look at us" line from his original "Hot Ones" episode. Yes, this gag is just about as meta as it gets. 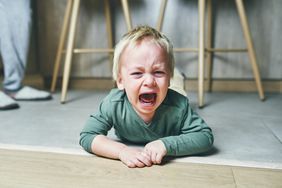