While there is plenty of cause for worry about the news in Ukraine, there are also bright spots of humanity offering hope. We found a few inspiring examples of people showing empathy and kindness despite the terror of war.

The unprovoked Russian attack and invasion of Ukraine is entering its third week as the world looks on in anxious bewilderment about how to help or make it stop. Many of the stories coming out of Ukraine are terrible and heartbreaking; for people outside of Ukraine watching events unfold online, these images can quickly leave one feeling depressed and sick with worry. And how could it not with a steady stream of videos showing bombed neighborhoods, bloodied children, and terrified Ukrainians hiding in subways as Russian soldiers advance?

As the invasion continues, Ukrainian citizens are trying to leave in droves, but their efforts are being hampered by the Russian military attacking civilians. Still, according to CNN, 1.5 million Ukrainians have left the country, the most refugees fleeing a single country since WWII.

But there are also stories of strength, unity, and hope that are managing to pierce the thick glut of nonstop media coverage. From courageous soldiers like the Ghost of Kyiv, who may or may not be real, but let's be honest, we need him for morale, even if he turns out to be an urban legend. Ghosts aside, there are countless examples of people from all walks of life who are doing everything they can to help give the fleeing Ukrainians some help, love, and a reason to hope.

In Poland, mothers are leaving empty strollers at train stations so that Ukrainian parents, who had to flee their homeland with babies and the clothes on their backs, can have some support. Poignant images of the strollers gathered on a train station platform have widely circulated social media over the last two days, inspiring the world to choose kindness.

The original photo should be credited to Francesco Malavolta who posted the image on Twitter.

At a train station in Berlin, thousands of German individuals and families showed up to the train station to help Ukrainian refugees by offering to open their homes to anyone who needed a place to stay. In this clip from TikTok user @thisorthatmort, a woman wearing a halo of flowers talks into the camera, explaining that the train station is surrounded by people wanting to help. As the camera pans around the station, we see an ocean of handwritten signs by Berliners looking to help refugees.

It's hard to wrap my adult brain around what is happening to the people of Ukraine, but imagine what a kid must be feeling. I'm not alone in worrying that this war is impacting kids; the folks in Romania who set up a refugee encampment to help Ukrainians managed to surprise one young Ukrainian girl. This past week, video footage surfaced of Romanian volunteers surprising a seven-year-old girl named Arina. She is seen smiling as a circle of people sing "Happy Birthday" to her. She's then carried to a cake, where she blows out the candles as the small festive crowd cheers her on. It's one of many small but lovely moments when people put kindness first.

Massive Protests Around the Globe

In a global show of solidarity with the Ukrainian people, untold numbers of people around the world have taken over streets and capitals to protest the Russian invasion and attacks. In a stirring and inspiring video put together by VICE News, video footage shows protests in Tbilisi, Georgia, Saint Petersburg, Russia, London, UK, Haifa, Israel, New York, USA, Stockholm, Sweden, Dublin, Ireland, Melbourne, Australia, and Yekaterinburg, Russia. Citizens who are protesting in Russia are putting their lives in danger as the Russian military and police are mass arresting protestors and threatening to send them to the front lines to fight for Russia. The show of solidarity is heartwarming and morale-boosting.

One sad casualty of war is the fact pets are left behind when people are forced to evacuate. But thanks to the help of international volunteers at organizations like PETA and Humane Society International, many of the bordering countries where Ukrainian people are crossing are now relaxing their rules around pets. There are countless videos on TikTok and Twitter showing people carrying cats, dogs, bunnies, and more to safety instead of being forced to leave their beloved pets behind. Right now, as Ukrainians are experiencing acute stress and anxiety, being able to keep their beloved pets is just one tiny spark of light in what is otherwise a very dark time.

Social media influencers and netizens have come together to mass book Airbnb in Ukraine. The idea is to book a room but not show up as a way to get cash in the hands of Ukrainians who are desperate for gas, food, and supplies to help get them to safety and replace lost income. According to NPR, the grassroots actions by social media users placing reservations in Ukraine have raised an impressive $2 million, with more than 62,000 bookings from people all around the globe.

The situation in Ukraine is heartbreaking, and these acts of humanity are providing hope and safety to those who have had to leave their home. 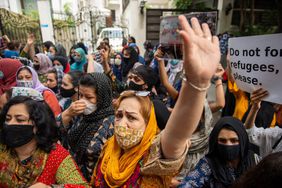