Paid family and medical leave is set to be cut completely from President Joe Biden's Build Back Better spending package, making the U.S. the only industrialized country not to offer a federal policy. But working parents aren't going down without a fight—and you shouldn't either.

House Speaker Nancy Pelosi announced Wednesday that 4 weeks of paid family and medical leave will be added back into President Joe Biden's Build Back Better plan. This comes a week after Democrats cut the originally planned 12 weeks of paid leave in Biden's initial proposal down to 4 weeks. And then paid leave was scrapped altogether.

To put things into perspective, the United States is the only industrialized nation without a federal paid leave mandate, though some states—like California, New Jersey, New York, Rhode Island, and the District of Columbia—do have paid leave plans in place. According to data from the World Policy Analysis Center at the University of California, the global average for paid maternity leave is 29 weeks and the average paid paternity leave is 16 weeks.

Parents were outraged over the news—and rightly so—and they weren't going to give up without a fight. Over the course of the following days, Americans contacted their representatives to demand they add back in paid leave, parents shared their real postpartum stories to help others understand how critical—to healing and bonding—those early days really are, and they got loud on social media and in person at rallies.

The current spending bill is now set to offer 4 weeks paid leave for parents to heal, bond, and recover with their loved ones. And, yes, it's certainly better than zero weeks—which is downright cruel to new parents—it's still not enough.

Most birthing parents aren't cleared following childbirth—meaning their bodies haven't finished healing from all of that hard work—until their six-week postpartum checkup. After giving birth, bleeding continues for up to six weeks. Daycares don't even accept infants until they're at least 6 weeks old.

Parents need support in that precious postpartum period—and we can't stop fighting until we have the paid family leave we deserve.

Parents Are Enraged and Devastated

Working parents flooded social media to share their disbelief and devastation that Democrats' promised paid leave plan was fading right in front of their eyes—cut from 12 to 4 to 0 weeks. Like their hard work and struggles and needs don't matter. They're sharing their personal stories to bring awareness to what really happens in the postpartum period and in hopes that Congress will act to save paid leave. But just because 4 weeks of paid leave is set to be added back into the Build Back Better plan doesn't mean parents should stop being vocal about why they—moms and dads and caregivers alike—so desperately need paid leave.

"I am one of the women in the workforce who was offered no time off at my job after having my baby," shared Kimberly Linko of North Carolina on the @paidleaveus Instagram. "I had 'not earned' my maternity leave yet. My husband and I could not afford to have me go without pay, so I used all the sick and PTO time I had, which gave me just two weeks off. I spent one week of it in the hospital prior to having a C-section. At two weeks, I couldn't drive, could barely walk, was sleep deprived, and breastfeeding exclusively, but I still had to go back to work when no daycares accepts children before 6 weeks old. We need to support working parents and pass paid leave."

As shocking as the story is, Linko's postpartum experience isn't actually all that rare in America. Mom of three Liuba Grechen Shirley shared on Instagram that at two weeks postpartum she spiked a 105 fever, nearly passed out, and wound up with an infection after retaining placenta from her son's birth. She was home alone with two babies because her husband was out of paid leave already and had to return to work. Two weeks later she was still home alone—this time with an IV in and nursing two babies.

"Before these sweet boys were born, I spent over 2.5 months on bedrest," tweeted @karidorry. "I didn't have enough sick leave left to cover much of a maternity leave. Too many families are in similar situations. Living in a country of abundance, the lack of paid leave is unacceptable. We need to find a path forward that includes paid family leave. Babies need their families and families deserve time at home. #PaidLeaveCantWait."

The sentiment is the same everywhere you look: Childbirth is exhausting. Recovery takes time. Bonding with a new baby is crucial. Six months should really be the minimum time afforded to new parents—especially when it's not actually all that unusual around the world.

And you'd think that Mona Amin, D.O., the doctor behind @pedsdoctalk on Instagram, a mom, and creator of The New Mom's Survival Guide, would be set up for success when bringing her newborn home—but you'd be wrong.

"I am a physician married to a physician," Dr. Amin wrote on Instagram. "I don't have paid maternity leave. In order to get some sort of salary while on mat leave, I had to use vacation days and take out short-term disability (did you know that pregnancy is considered a disability?), which ensures me 60% of my salary up to a certain amount, but you contribute to this with your normal paycheck."

America needs to do better for working parents—regardless of their income or socioeconomic status. This affects us all.

How You Can Help Save Paid Leave

We shouldn't still be begging for paid maternity and paternity leave in 2021—especially when the United States is a leader in so many other ways. Why are we so behind when it comes to progress here?

As frustrating as it is, the fight's not over yet. Here are a few things you can do right now to help #SavePaidLeave:

The point is it's not over yet and parents won't stop until we save paid leave. Let's do this. 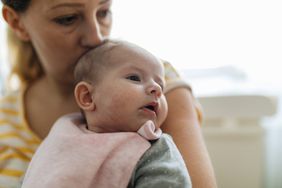