Parents around the country are still pinching themselves over the fact that Kamala Harris has become the U.S.' first female, Black and south Asian vice president. Now, an educational entertainment media company is making it easy to celebrate the newly-minted VP's story with your child. Rebel Girls, an award-winning books and podcasts company on a mission to instill confidence in 50 million girls over the next five years, just debuted the latest episode of their Good Night Stories For Rebel Girls podcast, featuring Harris' journey, read by comedian, writer, and actress Ilana Glazer.

"Once there was a girl who would represent a lot of firsts and would rise to become one of the most powerful people in the world," says Glazer in the podcast's opening.

The episode goes on to detail the VP's personal journey to becoming an accomplished attorney, senator, and now the second-highest officer in the executive branch of the U.S. federal government.

The episode, which is free to listen to on SoundCloud, Apple, Pandora, Spotify, Google Play, iHeartRadio, Stitcher, TuneIn, and Overcast, is a little over 17 minutes long.

The company is also publishing a new book Rebel Girls Lead, which was released to celebrate Kamala Harris's inauguration. Geared to kids ages 5-10, the book celebrates the inspiring stories of 25 women leaders in politics, business, sports, and activism including the VP herself, Stacey Abrams, Ruth Bader Ginsberg, Malala Yousafzai, Aly Raisman, and more.

The book is currently available for presale at $8.99 and preorders ship February 8.

So parents who are committed to ensuring that their young feminists continue to be awestruck by influential women, you have some bedtime stories in the queue! 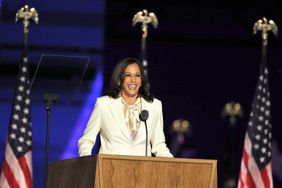 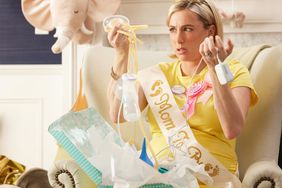