My Daughter Walked out of School to Protest Gun Violence, and I Support Her

On the one-month anniversary of the school shooting at Marjory Stoneman Douglas in Parkland, Florida, tens of thousands of school students from more than 3,000 districts across the country—and even around the world—walked out of their classrooms at 10 a.m. to honor the 17 lives lost that day—and to demand stronger gun laws to help protect them and make their schools safe.

Some students have risked punishment by leaving school to protest, as districts threatened detention, suspension, and other demerits for those who walked away from their classroom. Others are backed by the school administration, who are offering different ways for kids to participate.​

And these student-led demonstrations each have a different way of taking part. There are moments of silence—Parkland had 17, one for each life lost—hymns sung, and chants of "Enough is enough" and "Gun control now." In Washington DC, students turned their back to the White House as they participated in 17 minutes of silence, before marching to the Capitol to meet with lawmakers. There are signs and marches, die-ins, voter registration drives, letter-writing and sign-making events, and speeches from students themselves, and from their elected representatives.

And it isn't just high schoolers—in my district, my daughter's middle school class organized their own walkout, and the parents petitioned on behalf of the older elementary students, who wanted to take part but due to their young age, would not be allowed to walk out of the school building. (My fifth grader engaged in a moment of silence in her school gym.) In one elementary school district in Virginia, the 11-year-old organizer of a protest actually made her own handmade and handwritten press packet to give to reporters to help get their message out there.

This was an opportunity to step back and let my daughters do the talking. And even at 13 and 11, my daughters have plenty to say about this. They want their schools—where each of my daughters have been in the building during a real lockdown, and where lockdown drills happen more often than school assemblies—to be safer from gun violence. They want better and stronger gun laws, including a ban on assault weapons. And they both felt strongly about taking part in this action, along with the March for Our Lives next week. Nothing was going to stop my older daughter from participating, and we let her know that if the school district punished her, we would fight it and have her back. Fortunately, the entire school district put plans in place to support the demonstration. And by all accounts, it was highly successful, with local representatives and parents coming out in support for the hundreds of high school students in our town who walked out today.

For so many of the students, gun violence has become a defining issue for them. "I think that this is a turning point," one student from Great Neck, New York, said. "Things really have to change—we won't tolerate it. We cannot be hunted."

And for those who risked punishment, the opportunity to take part in the protest and show their solidarity makes punishment a moot point. "These are lives at stake," said one student from a Catholic school in Georgia, who would be suspended for leaving her class. "This is so much more important."

Yesterday, more than 7,000 pairs of shoes were placed on the Capitol lawn to represent the children who have died of gun violence since Sandy Hook happened in on December 14th, 2012. And today, those shoes have been replaced by the marching feet of thousands of students who are determined that these shootings will never happen again. 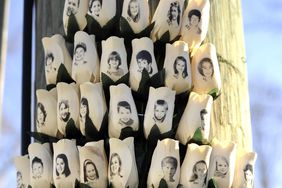