From LOL Surprise! Dolls to American Girl dolls and Fortnite action figures, here are the most loved toys of 2019, according to a new report.

It doesn't have to be December for your child to be obsessed with the latest and greatest doll or video game console, but they're bound to be hyper-aware of their faves around the holidays. So what better time to take a retrospective look back at 2019's most popular toys? That's exactly what Wakefield Research, a quantitative, qualitative and market intelligence research firm, has done with their 2019 Toy Popularity Index.

Here, the highlights of the report.

The Most Popular Dolls

Dolls in general are among the most popular toys for kids up to 7 years old and chief among them? LOL Surprise! Dolls, obviously. Although some parents have taken issue with the dolls' anatomically correct design in recent months, that isn't curbing their popularity. They've averaged more than 1 million monthly searches.

LOL Surprise! Dolls finish ahead of:

The Games Kids Are Loving

Believe it or not, a classic is the most popular toy type among kids 8+: Monopoly, which gets 306,200 average monthly searches. Meanwhile, LEGO (including Star Wars Sets, Friends Sets, Minecraft Sets, etc.) got a total of five entries in the top 10 and seven entries in the top 20.

Other popular toy types in the 8+ age category include games like the Disney Villainous Board Game (third place), Battleship Board Game (another classic, which came in 10th), Clue Board Game (11th), Guess Who? Board Game (15th), and the Jenga Game (17th).

For the 0-7 set, Melissa & Doug toys, which are generally activity-oriented and educational in nature, made it to #19.

NERF Toy Guns hit #9 on the list of toys for older kids, and Star Wars Toy Lightsabers made it to #16. National Geographic's Slime Kit was #19.

The Most Popular Video Game Consoles

The report should serve to reassure parents that whether their kid won't let up on unwrapping that American Girl Willa Doll or Fortnite action figure this holiday season, they're absolutely not alone. 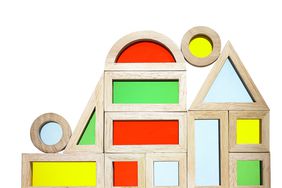