The number of children crossing the U.S.-Mexico border is soaring. Here's why and what families can do.

The number of migrants arriving at the U.S.-Mexico border in 2021 is on pace to be the highest number in 20 years, according to one of President Biden's top officials. And that number includes a jaw-dropping increase in unaccompanied minors. U.S. Border Patrol detained more than 11,000 unaccompanied migrant children between February 28 to March 20, according to preliminary government data reviewed by CNN. That's a significant uptick from the 9,300 children who were apprehended in February and 5,600 in January.

As of March 21, U.S. Customs and Border Patrol (CBP) agents were holding more than 15,500 unaccompanied children in custody—including 5,000 teenagers and children stranded in Border Patrol facilities not designed for long-term custody.

In turn, the Biden administration's current and proposed solutions are under the microscope. Here are all the details and how you can help.

Why More Children Are Arriving at the Border

About two-thirds of unaccompanied children caught at the border since October 1, 2020, have been from Guatemala, El Salvador, and Honduras, while Mexican children make up most of the remainder, according to U.S. Customs and Border Protection (CBP).

It does bear noting that more adults and families are arriving than unaccompanied minors: Between February 28 and March 20, Border Patrol apprehended more than 60,000 single adults and more than 32,000 families.

Nonetheless, it's an unnerving trend. And the driving forces are varied. Unaccompanied children may come to the U.S. to reunite with family members, or as a Congressional Review Service (CRS) report points out, they may be escaping high rates of violent crime, gang violence and recruitment, and severe economic insecurity. A United Nations survey of 404 UACs in the U.S. found that the majority were fleeing persecution, violence, or abuse and indicated a need for international protection.

Recently, Central America has been hit with hurricanes and an economic downturn on top of the pandemic, reports Reuters.

And they note that, according to Biden officials and migrant advocates, the current increase is also at least partly due to a recent policy change that now allows unaccompanied children into the country, whereas the Trump administration had expelled them. Within the first week of holding office, the Biden administration also overturned Trump's "zero tolerance" policy, which involved separating migrant children from their families in an attempt to prosecute every migrant who crossed the border without authorization.

How the Biden Administration Is Handling the Situation

Over the course of the Trump administration, unaccompanied minors were held in detention centers that featured overcrowded metal cages and foil blankets among other humanitarian horrors. But this week, controversy erupted after Texas Democratic Congressman Henry Cuellar, who visited a government-run tent city in Donna, Texas, holding 1,000 people, released the first photos of the camps to be taken during the Biden presidency.

The images show rows of migrants sleeping on mattresses on the ground covered in foil blankets while unaccompanied minors and families stand in line for processing or receiving meals.

Mark Greenberg of the Migration Policy Institute told NPR that the lack of shelter beds is due to state and local requirements during the pandemic, the need to follow CDC guidelines, the need to quarantine and in some cases isolate children when they arrive, and the fact that sometimes staff members have been absent because they are sick.

Meanwhile, administration officials note that the conditions are a result of a weakened, undermined immigration system that Biden inherited from the previous administration.

Homeland Security Secretary Alejandro Mayorkas explained on Sunday, March 21, "We have seen large numbers of migration in the past. We know how to address it. We have a plan. We are executing on our plan and we will succeed." He added that, "It takes time" and is "especially challenging and difficult now" given the Trump administration's moves. Mayorkas concluded, "So we are rebuilding the system as we address the needs of vulnerable children who arrived at our borders."

They're also working to establish programs that will allow Central Americans to apply for refugee status in the United States from their home countries and improve conditions in those countries, according to Reuters.

What You Can Do to Help

To help support children who are seeking asylum at the border, families can consider making any or all of the following moves.

Learn even more about the situation. Save the Children advises people to learn more about the complex mix of social and economic factors that have caused families and unaccompanied children to flee their homes in El Salvador, Guatemala, and Honduras.

Support the Women's Refugee Commission. Donations support the Migrant Rights and Justice program, which works to hold the government accountable and to ensure that refugee children and families are treated humanely and fairly.

Apply to become a Young Center Child Advocate. The Young Center, which champions the rights and best interests of unaccompanied immigrant children, has volunteers in Chicago, Houston, San Antonio, Harlingen, Phoenix, Los Angeles, New York, and Washington, D.C. You can apply to become a Child Advocates who meets with an immigrant child in federal custody every week and assists Young Center staff in advocating for that child's best interests.

Find a local organization to volunteer with. You can use the Immigration Nexus's directory to find an organization in your area. Contact them to see if they need volunteers.

Write your representatives. Whether you write them directly or join an advocacy group Save the Children Action Network (SCAN), you can advocate for children's rights. 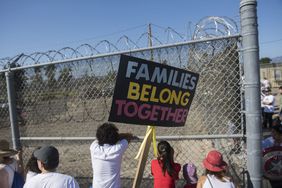 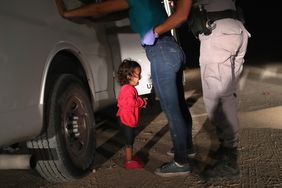