If you needed a reminder that you're doing more than enough, this video will help.

Parenting can be exhausting. Some days, it can feel like running a marathon. And yet, when it's time to go to sleep, it's easy to focus on the things you didn't get done—a gourmet home-cooked meal or a trip to the park—rather than everything you did? You may feel like you let your child down.

TikTok mom-of-three Jess Martini wants parents to know they're doing more than enough. The vlogger recently invited parents having "one of those days" to see things through their child's eyes in a viral video that's gotten 4.3 million views.

The video starts in black-and-white. "I can't believe I'm cooking from a box again," says Martini as she pours pasta from a box.

It then cuts to a shot of Martini's son in full color with a bowl full of pasta and red sauce. "Yum, this dinner's my favorite," he says as he does a little dance.

Then, we see a black-and-white shot of the two on the couch watching TV. "Ugh, we really should be doing more learning games or go to a playground," Martini says.

But Martini's kiddo has a different take on things. The video goes back to full color as the young boy says, "Snuggling and a movie—this is the best day ever."

The mom guilt is still real for Martini. "I should have done more today. I was just so tired," she says.

Her son is now tired too. He's passed out in his bed with a big grin on his face. "I love my mom," he says.

Cue the tears—and thousands of comments from people who needed this video.

"This made me cry," one person commented. "Just had this come across my [for you page]. Thank you so much for these videos. You've helped two parents today," another said.

And the videos provided a way for some older kids to say thanks to the parents that cooked them delicious boxed dinners and snuggled on the couch when they were little.

"My 19-year-old son left for the Air Force four months ago. We miss each other so much. He sent this and said I'm the best mom and thanked me for everything," one mom said.

"When your 17-year-old baby boy sends you this and reminds you of single-mom days/nights," another wrote.

Martini seems to have a knack for giving parents the tips and perspectives they need. Last year, she went viral for a video about how parents can find their wandering kiddos in a public place. Instead of silently and (understandably) frantically looking for the child, Martini suggested walking through the place loudly stating that you're looking for a lost child and describing what they look like and are wearing.

"Now you've got every single person who is around you looking for your child instead of just you and, best case scenario, somebody finds your child, and they return them to you," she said.

The bottom line? Parenting is tough, and we all have our moments. It takes a village—and sometimes, part of that village might be someone who has "been there, done that" on TikTok. 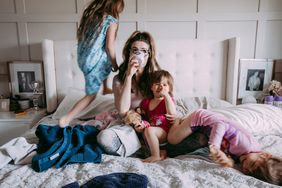