Approximately two out of five child care centers—and half of those who are minority-owned businesses—say they will close permanently without additional public assistance, according to a new report.

From education to racial injustice, the pandemic continues to shine a light on crises that the U.S. has brushed under the rug for far too long. Now, a new survey from the National Association for the Education of Young Children (NAEYC) makes it clear that the child care industry is in a state of emergency, and public assistance is necessary to preempt further damage that could affect the U.S. economy, as working parents increasingly struggle to find dependable child care.

NAEYC surveyed over 5,000 child care providers working in center or home-based child care programs from all 50 states, Washington, D.C. and Puerto Rico. And the study had some alarming findings.

Enrollment is way down.

Nationally, 18 percent of child care centers and 9 percent of family child care homes remain closed, according to the survey. Of those who are open, 86 percent of respondents are serving fewer children now than they were prior to the pandemic. On average, enrollment is down by 67 percent. And 63 percent of programs across all settings expect to be operating at or below 80 percent of enrollment past the end of this summer.

Upwards of 70 percent of child care centers are contending with additional costs for staff (72 percent), cleaning supplies (92 percent), and personal protective equipment (81 percent). In turn, 73 percent of programs indicated that they have or will engage in layoffs, furloughs, and/or pay cuts. For minority-owned businesses, the situation is worse: Only 12 percent have not resorted to these cost-cutting measures.

Providers are bracing for long-term challenges.

While approximately half of child care programs have been closed at some point during the pandemic, now, approximately two out of five respondents—and half of those who are minority-owned businesses—are certain that they will close permanently without additional public assistance.

Smaller providers are missing out on aid.

What Must Be Done to Save Child Care

The NAEYC concludes the report by urging Congress to act to save child care programs, which allow families to get back to work and school. "Our nation’s goal must not simply be to return to the way things were before, but rather to finally resolve the fundamental challenges that have confronted this system for decades," the authors write.

Their research found that a full 58 percent of programs, including 46 percent of family child care homes and 73 percent of minority-owned businesses were working toward increasing their capacity to meet growing demand prior to the pandemic.

It isn't enough to get back there. Instead, the authors urge Congress to offer both short- and long-term support for child care providers. The authors note that lawmakers must "provide needed, additional, dedicated, substantial investments to stabilize child care and early learning so the essential child care workforce in this $99 billion industry can continue to support children, families, and the American economy through this crisis, recovery, and beyond." 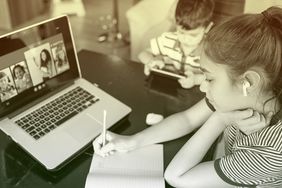 46 States Are Doing Some Form of At-Home Learning, But Few Have Child Care for Working Parents