Late Talkers Have More Tantrums, According to New Study

Children who can say 50 or fewer words by age 2 are more likely to have frequent severe temper tantrums.

Parents have always known their speech-delayed toddlers are more likely to have temper tantrums. It makes sense, after all. These little people are learning to communicate and desperately trying to convey their wants, needs, and more. So, when they can't communicate, frustrations arise. Parents of late talkers have visibly seen this kind of behavior, but there's never been any research to back it up—until now.

A new Northwestern University study found that toddlers who have fewer than 50 words by age 2 are twice as likely to have severe and frequent temper tantrums (the kind where toddlers hold their breath and bang their heads). Why does this matter and what can we do about it?

Previous Northwestern studies led by co-principal investigator Laurie Wakschlag, Ph.D., found that certain kinds of frequent or severe tantrums can indicate risk for later mental health problems like anxiety, depression and conduct disorder. Early intervention is crucial for late talkers because about 40% of delayed talkers will go on to have persistent language problems that can affect their academic performance. And let's be honest, it's just nice for parents to know they're not crazy, right? Speaking as a mother who had a speech-delayed toddler, it's helpful to hear my son's tantrums were relatively in line with what's "normal."

As Elizabeth Norton, Ph.D. and co-principal investigator of the study, explains, the data from this study can only show that there is a correlation between late talkers and their behavior. However, Northwestern is doing a longitudinal study now called the "When to Worry Study" where they follow hundreds of children who have tantrums or irritable behavior, language delay, both, or neither.

Another possible explanation is that a child who is biologically inclined to be more irritable and has many tantrums doesn't get the same quality and quantity of language from his caregivers because his behavior is so challenging. It could also be that there are genetic or environmental factors that make kids more likely to have both irritability and language problems, because we see even in school-age kids that these two problems happen together much more often than we would expect if they were totally unrelated. This "When to Worry Study" hopes to unfold all of these layers.

So, if you're a parent of a later talker, don't be afraid to consult with your pediatrician about your concerns. Norton says, "the pediatrician can perform tests to rule out conditions like hearing loss or autism that may explain your child's language delay, and help determine if any follow-up is needed."

From here, you can try to give your child rich language input. In other words, simply talk a lot and provide a rich quality of language. Norton describes "quality" as following the child's lead and being responsive. So, you can talk about what the child is interested in or even focused on in a particular moment. For example, if your child points at his favorite penguin toy and says "that!," the parent can pick up the toy and say "Penguin hops!" That response is likely more effective in helping the child learn than saying "uh huh, that." In effect, this builds on their language.

The bottom line? Just keep talking with your child. Follow their lead and be as patient as you can—because your frustrations are likely a fragment of what your little toddler may be feeling. 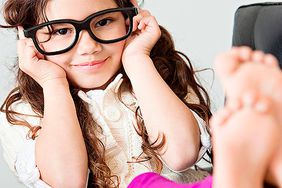 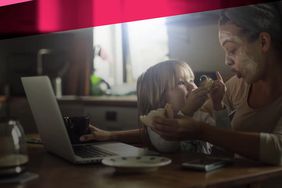