The mass exodus of working moms may undo decades of progress. CNN anchor Lynn Smith has been covering the pandemic since the beginning and is stunned by how many stories are mirroring the same issue: mothers need help.

Alarm bells should be ringing. Working women, particularly moms, are not OK nearly a year into this pandemic. Stretched to the limit and juggling balls in the air no one could ever prepare for, the progress women have made in the workplace for decades is at risk.

Just look at Beth Hogan. "I'm not enough for the job, for the home, for anything and that's hard and it's really lonely," this working mother told me on CNN Headline News. In March 2020, Hogan had just completed her master's degree, and was preparing for her dream job when the world came to a screeching halt along with her career plans. Instead, she struggled through distance learning, Zoom conference calls, endless chores that often fall into women's laps, and the impossible expectation that any of this is possible.

Now, 11 months later Hogan says, "It's just hard to be on your game anywhere."

Hogan says she wakes up most mornings at 5 a.m. to get work done before her two elementary-age children wake up to attend class in her makeshift office—her living room. The stress and pressure of interrupted Zoom calls and presentations became too much in December when she was hospitalized for dangerously high blood pressure. It has her asking herself how sustainable this can be and is considering leaving the workforce. She is not alone.

Experts are warning that a "She-cession" is looming, a reference to a recession for women who are leaving the workplace in droves. According to the Bureau of Labor Statistics, women accounted for all job losses in December, a total of 156,000 while men gained 16,000 jobs. Since this pandemic began, more than 2 million women have left the workforce and that is threatening to wipe out the incredible progress so many women, especially working mothers, have made.

It's not surprising many are choosing family over their career; that's what mothers do. They often sacrifice everything—even themselves—to give their children the best life possible. They work hard and for a greater purpose. It's exactly why the workplace can't afford to lose us.

Allison Bittel, the senior vice president of Colliers International and founder of the Women's Collective in Atlanta, has been championing women her entire career and initially thought the pandemic would be revolutionary for working moms. She thought the flexibility and working from home may offer women more balance. Like many aspects of these unprecedented times, no one could have expected how things would actually unfold. "Companies are 50 percent more profitable when they have women at the top," Bittel tells me. "So if you start to lose women leaders at the top, you don't have women to mentor the women that are coming behind them and it just all falls into itself."

New York Times parenting editor Jessica Grose is another mom working from home while taking care of two small children. Through her reporting, she saw how many women were living her reality as well. It inspired her to open a primal scream hotline. It's the perfect name for the purpose. You can call a hotline just to scream. One whole minute, the mic is yours to yell, shout, and vent about the insane amount of stress you may be facing. Grose had no idea how popular the primal scream hotline would become.

"Hundreds of people called screaming, yelling, just venting," says Grose. "And it was just really kind of beautiful." A beautiful mess of emotions to let other working mothers know you're not alone. The New York Times found 69 percent of moms say they have had adverse health effects during the pandemic because of worry and stress. I know some of you may be saying, what about the dads? Yes, there are some dads bearing the burden of work and home life. Still, Grose found 66 percent of moms say they are chiefly responsible for child care compared to 24 percent of dads. And we know women are also bearing the burden of chores at home during the pandemic.

And while screaming helps, it's not enough. Advocates are urging companies to reevaluate their policies on everything from flex time and sabbaticals to adjusting performance goals. Grose also feels federal policy to protect women in the workforce has to be considered to prevent further losses that may become impossible to recover from.

Finally, the answer may be even more simple: being human. Bittel says her CEO at Colliers often calls just to ask, "Are you ok?" A simple gesture that can allow an employee to be seen and heard. 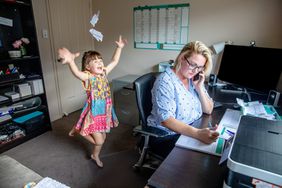 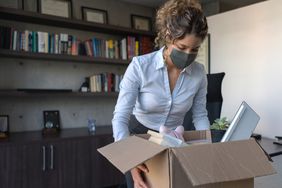