To inspire joy and do something special for new moms and babies, a Missouri hospital's maternity doctors and nurses created Baby Shark-themed costumes for newborns.

Giving birth during a pandemic has been anything but easy for new moms. That's why maternity doctors and nurses at Saint Luke's North Hospital in Kansas City wanted to do something fun and special for them: make their newborns Baby Shark-inspired costumes.

According to a press release, one of the Saint Luke's North obstetricians is a huge fan of Shark Week (which began August 9) so the staff decided to do a Baby Shark week and cast their smallest patients as the stars.

The nurses on staff helped create all the colorful Baby Shark costumes (while following strict COVID-19 safety and infection protection protocols). They also served as photographers, capturing all the baby sharks and a video that the hospital has shared on social media.

The hospital released the images in cute graphic frames featuring those "Baby Shark" lyrics that are nearly impossible to get out of your head and other plays on words.

Upon seeing the video and images, the hospital's Facebook followers loved the super-cute effort. One commenter noted, "My daughter was in the NICU during Halloween one year, and St. Luke's was so sweet to her and dressed her up like a pumpkin. I adore them!" Another shared, "I see so many familiar, beautiful faces that have helped deliver my 5 babies over the last 8 years."

Cheers to the staff's ability to provide so much sweetness to their patients during a particularly challenging time. 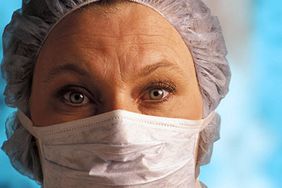