Having a Boy Puts You at Possible Risk for Postpartum Depression, Study Says

Researchers believe that there is a link between having a boy and subsequent PPD symptoms.

A new study by a pair of UK researchers has linked an increased risk of postpartum depression (PPD) to women who had male babies, finding that the odds of developing PPD were 71-79% higher for women who gave birth to boys as opposed to girls. It also found that birth complications during labor and delivery increased the risk of PPD by 174% (compared with births that had no complications).

Researchers studied the reproductive histories of 296 women via survey, asking respondents to self-report feelings of depression after birth as well as answer questions about labor and delivery experiences.

"Because our data had information on women's complete reproductive histories, we could look at differences between all of an individual mother's births, not just across women who happen to have given birth at a particular time," says study author Sarah Myers, Ph.D., honorary research associate at the University College London department of anthropology. This approach allowed Dr. Myers and her co-author, Sarah E. Johns, Ph.D., to control for more factors than previous similar studies.

But what could infant genders and birth complications have in common—and why might they both cause higher incidences of PPD?

Quiz: Could You Be Exhibiting Symptoms of Postpartum Depression?

"There is increasing evidence to support a link between inflammation and subsequent depressive symptoms, and male fetuses have been linked to increased risk of pre-eclampsia and gestational diabetes, both of which involve the immune system," Myers explains. "This made us wonder whether there would also be a link between giving birth to male infants and PPD."

Researchers are still trying to understand the potential connection between male babies and inflammation, but it's easier to understand why birth complications—which Myers said may include everything from cesarean sections to episiotomies—may trigger a heightened immune response.

Although it makes sense to assume that the odds of developing PPD would be even higher for women who have both risk factors (i.e. they delivered male babies and had some kind of birth complication), the study results were inconclusive on that front. Dr. Myers does add, however, that existing research into depression has shown an elevated risk when multiple risk factors occur, so it merits further study.

For physicians, the study results present a unique theory about the possible link between PPD and these two risk factors.

"It is interesting to note the role of inflammation in the development of depression," says Kecia Gaither, M.D., a double board-certified physician in OB/GYN and Maternal-Fetal Medicine and director of perinatal services at NYC Health + Hospitals/Lincoln. "Research has noted a difference in the immune response of women carrying a male versus a female fetus, and operative deliveries, episiotomies, and the development of a uterine infection in the postpartum period all additionally affect the immune response in postpartum women."

At the same time, Dr. Gaither warns that while the study lays a strong foundation for exploration of an important topic in perinatal care, it also poses a few problems. First, it was completed retrospectively on women born prior to 1966 (so pregnancy-related care was much different than it is now). Second, information about the subjects' medical and mental comorbidities is unknown, making it hard to confirm a clear correlation between infant gender, birth complications, and PPD.

Mary Jane Minkin, M.D., clinical professor of obstetrics, gynecology, and reproductive sciences at Yale University, agrees that the findings may pose more questions than they answer. "Birth complications themselves can be fairly traumatic, and I would think anyone who has been through significant trauma would be at higher risk of depression just from the emotional trauma alone that she has endured," she says. "I think it would be difficult to figure out whether it's the emotional trauma or the secondary inflammation [causing the depression]."

Even if the study doesn't draw a definitive connection between infant gender, birth complications, and PPD, it's promising that the risk factors of depression in postpartum women continue to be studied—and that researchers are asking key questions about the underlying causes of PPD.

"Further research [like this study] may lead to a specific causative chemical factor, and in so doing may uncover specific screening methodologies or even medicinal therapy to prevent the development of postpartum depression in women," says Dr. Gaither. 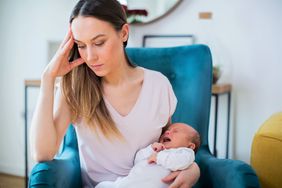