An Ohio mom named Love Gwaltney and her family did a heartwarming photo shoot to celebrate their 17-year-old son.

Everyone loves a reason to celebrate, and for many families, learning the sex of their baby is an impetus for balloons, cake, a sweet photo shoot, sometimes even special effects in the form of blue smoke or pink confetti. But there's only so much you can know from an ultrasound—and gender isn't one of those details, as a mom from Akron, Ohio knows full well.

Love Gwaltney recently shared the results of an adorable photo shoot from her gender reveal for her son—who is now 17—on Facebook. The 35-year-old explained that when she was pregnant, she thought she was having a girl. But in fact, she has nonbinary son named Grey.

"We wanted to announce that we got it wrong 17 years ago when we told the world we were having a little girl, and named that child McKenzie," she wrote alongside the images, taken by photographer Sarah McBride. "So, we'd like to introduce you to our SON: Grey. He's much like any other 17-year-old nerdy boy, stays up way to late gaming, hates showering, and eats too much junk food. We will be referring to Grey with he/him pronouns from here on out, but he told us to tell you that he also doesn't mind if you use they/them."

Gwaltney also commented on how society treats a baby's gender well before they come into the world. "We get so excited, picking out clothes and nursery decor based on the sex of our babies," she wrote. "We throw parties, and pick out names. We assign attributes (like strength or beauty) based on what our child has growing between their legs. And MOST of the time, that works out perfectly fine. But sometimes, we force these expected characteristics based off biological sex, and, gasp, we've gotten it wrong."

She continued, "Normally, it's just off, but other times, that child you labeled a girl, doesn't actually feel like a girl. Sometimes that child disassociates who they are with the body they possess, and it can come across as body dysphoria or self-esteem issues and that's as far as it goes (to your knowledge). Other times, that child grows up feeling like a completely different person, and if you're really lucky, they open up and tell you the truth, no matter how scary or daunting that could be."

Gwaltney's son Grey Schoolcraft helped plan the heartwarming event alongside his mom and stepfather Brandon Gwaltney. His siblings McKaela Schoolcraft and Darwin Gwaltney were also in attendance, and the family posed next to balloons and cake in the colors of the nonbinary flag, per Grey's request.

In an update, Gwaltney wrote that her family is "absolutely loving the outpouring of love from the community."

Now, having received countless messages from the trans community, Gwaltney concluded in her post, "Just know your stories touch my heart, and that I am responding as quickly as my overly emotional, pregnant, mama bear self will let me. I hate that so many of you in the trans community were not given the love and acceptance you all deserve. I see you. I hear you. I am your new mom now!" 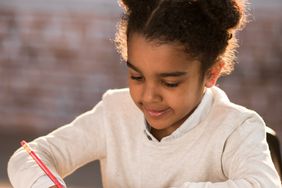 This Kid Had the Perfect Response to a Sexist Homework Question 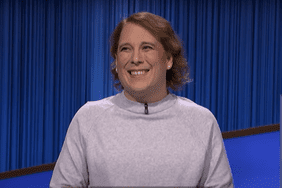