The mom of two and cookbook author is under fire for cyberbullying tweets aimed at reality star Courtney Stodden.

Chrissy Teigen has always been known for her outspoken takes on social media, but resurfaced tweets from 2010 have resulted in the mom of two, model, and cookbook author coming under public fire. The situation is so intense that tongues are wagging about Teigen being canceled. Here are all the details.

Understanding what's going down right now requires a bit of a pop culture refresher for starters. Back in 2011, Courtney Stodden was the subject of tabloid buzz, known for being a 16-year-old married to actor Doug Hutchinson, who was 51 years old at the time. Stodden, who is nonbinary and uses they/them pronouns, would go on to become a reality star and model.

Fast-forward to this past March when they made a video calling Teigen "hypocritical" for quitting Twitter over concerns about its negativity. Stodden said Teigen had cyberbullied her back in the early '10s. They then elaborated in a new interview with The Daily Beast's Marlow Stern, explaining, "She wouldn't just publicly tweet about wanting me to take 'a dirt nap' but would privately DM me and tell me to kill myself. Things like, 'I can't wait for you to die.'"

Buzzfeed notes that the alleged DMs have yet to be substantiated, but screenshots of since-deleted tweets from 2011—in which Teigen asks Stodden about their family and asks if they're on drugs—appear to be examples of the bullying the reality star described.

What We Know About Chrissy Teigen Being 'Canceled'

Since the Daily Beast interview dropped, Teigen has faced a major backlash. The Hill reports that Target and Macy's have reportedly dropped her "Cravings by Chrissy" cookware line. And TMZ notes that Bloomingdale's was about to ink a deal with Teigen to carry her cookware but has since backed away in the wake of the controversy.

Conservative commentator Candace Owens is taking credit for Teigen's "cancelation," writing in a Daily Wire piece, "If you've been following me on social media over the last week, you've seen that I've led a campaign for people to examine the long history of abuse that Teigen has directed at young women. We're not talking about mean tweets—we're talking about Teigen harassing teen girls and even encouraging suicide."

Stern, the Daily Beast writer, has since slammed Owens by tweeting that she herself "mocked" public figures who had died by suicide. "Candace owens claims she's going after chrissy teigen because she cares deeply about suicide," Stern wrote. "When she openly mocked meghan markle for having suicidal ideations and kurt cobain for taking his own life."

What Is Cyberbullying? Everything Parents Need to Know About Bullying Online

In response to the uproar, Teigen took to Twitter on Wednesday, May 19, sharing a series of tweets in which she said she's "mortified and sad at who I used to be." She continued, "I was an insecure, attention seeking troll. I am ashamed and completely embarrassed at my behavior but that is nothing compared to how I made Courtney feel."

Teigen went on to note, "I have worked so hard to give you guys joy and be beloved and the feeling of letting you down is nearly unbearable, truly." She said she tried to connect with Stodden privately but felt she owed her a public apology as well.

The bottom line for Teigen: "I am so sorry I let you guys down. I will forever work on being better than I was 10 years ago, 1 year ago, 6 months ago." 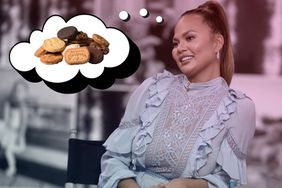