A Philadelphia dance studio shared a heartwarming video of the tiniest dancers accompanied by their dads.

No matter what they're dancing to, what costumes they're wearing, or what steps they're attempting, the littlest ballerinas are always cute. But a heartwarming, viral clip from Philadelphia-based studio E'Chappe Dance Arts proves that there's a way to make a performance by tiny dancers even more adorable—by including their fathers! During a recent ballet-yoga class for dads and daughters, E'Chappe owner and artistic director Erin Lee captured her students in action, and the video is, understandably, going viral.

Even Jennifer Garner and Kristen Bell are in love with the footage, reposting it to their personal Instagram accounts. Garner wrote, "Dads are the best. #TutuTuesday on a Monday." Bell said, “There are some amazing papas out there!!!!”

Filmmaker Ava Duvernay tweeted about the clip, writing, "I miss my Dad. He would have done this for me. To all the many, many millions of brothers out there being great, thank you."

She says she started the class two years ago after noticing how involved her little dancers' fathers were in pickup, drop-off, meetings, and events. "I wanted to involve them in the dance room," Lee says.

By posting the clip, the business owner was aiming to give credit where credit is due. "It isn't primarily acknowledged that there are fathers who are completely invested in their daughters' lives and who don't mind leaving their comfort zones to prove that," Lee notes. "I wanted to highlight them in hopes that absent-by-choice fathers see this and immediately become inspired to do better."

She also applauded moms and sisters who accompanied their little ballerinas to class. "One dad was out due to recent surgery, and another had to work," Lee explains.

The two-hour class had been held annually, but given that the community is now clamoring for more opportunities for dads to hit the barre with their daughters, Lee and her instructor Tymeisha Anderson will offer it monthly going forward.

Ten fathers were captured in the viral video, but we might see over four times that number in E'Chappe's next clip. Lee says, "After this weekend, I have 42 dads awaiting the opportunity to enroll." In the meantime, we'll prepare for cuteness overload. 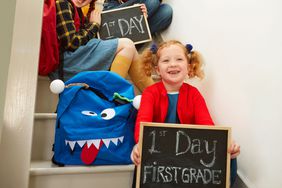