This mom polled Reddit parents to ask whether her husband was appropriate or absolutely crazy to ask their teen to pay for her own glasses. Here's what they said.

It’s a big milestone when kids are prescribed their first pair of glasses. Gone are the days full of worries of being called 'four-eyes' on the playground. Glasses are cool now. They're one more way to express personal style. But after shopping for the perfect fit, one dad made a big call: he said his daughter should pay for her new glasses.

The 14-year-old’s mom posted about the experience on Reddit under the apt name throwawayglassesmama. She explained that her daughter was looking forward to her new glasses in order to be able to see better in school, but when her husband took their daughter to buy the frames, he insisted she pay for them. The mom wrote that her “jaw dropped” when her husband reported what had gone down at the shop.

“To an extent, I can understand her paying a portion if she was dead set on expensive, fancy frames—but still, she's 14 years old, for goodness sake!” she wrote in Reddit’s Parenting forum. “I told him he was completely wrong, and asked him if she picked out some expensive, fancy frame. He said no. He said that in total, the glasses would be $125, which in my opinion, isn't that bad at all. He said he urged her to pick out the most basic frames and lens package, and that she panicked and said she didn't want the glasses once he asked her to pay for them, even a portion.”

She noted that the family has insurance and earns a middle-class income, meaning, “The cost is NOT an issue—the issue here is that my husband expected my 8TH GRADER to use her babysitting and birthday money to pay for her glasses!”

The mom then turned to Reddit, asking for other parents’ take on the situation. And the comments poured in with the thread receiving nearly 600 responses.

User JadieRose wrote, “I could see making her pay for them if she loses them by doing something stupid (I had to replace my own retainer when I accidentally threw it out), but for the first pair, yeah. You pay. It's your kid, FFS. And $125 is a bargain.”

Others were a little harsher.

“Your husband is crazy and that's probably some kind of medical neglect. She's a 14-year-old old and he's the parent. Buying glasses is the parent's responsibility, not the kid's,” wrote user codeplaysleep. “That said, when my kid was 16 and picking out frames for new glasses, I did say "OK, pick out anything on this wall, if you want those super expensive frames over there, you can cover the difference."

Redditter JacOfAllTrades agreed, writing, “Right? Like a limit is totally fine. ‘Hey, anything over $150 is on you’ or whatever a reasonable limit would be depending on where you're shopping. But to just outright expect the kid to pay? Really? Does she have to pay for her own checkups and tampons too? Damn.”

One user pointed out a practical reason behind finding a style your child likes.

“Let your kid pick their preferred style, even if they are costly or "outside" of a budget. BECAUSE YOU WANT YOUR KID TO WEAR THEM [sic],” wrote Reddit user MableXeno. “And if your kid thinks they are ugly, they will not wear them, which could not only make their eyesight worse but will be a total waste of money because they're not using something you paid for.”

Other users chimed in with suggestions for cutting costs. According to VSP (the largest vision insurer in the country), the national average price for a pair of glasses without insurance is around $230 for the frames and $110 for the lenses. Any extra—designer styles, bifocals, etc.—costs more. Redditers suggested buying glasses from Costco (an average total price of $186), Warby Parker (one pair for $95), or Zenni (options ranging from $7 to $45).

Why It's Good News That More Little Kids Are Wearing Glasses

In the original poster's case, she said she wanted her daughter to be able to go to a physical store for her first pair. She also gave an update to the story, once she'd gotten some clarity on what went down: Dad wanted his daughter to pick from the options on the sales rack, but some full-price frames caught the daughter’s eye.

“Husband was apparently concerned that she was too focused on vanity versus practicality, which to a point, I get...but hello! She has to wear them all the time, and she's a 14-year-old kid! It's good to be stylish sometimes!” wrote throwawayglassesmama.

She told Parents.com via Reddit that her husband was trying to teach a lesson in financial responsibility after a particularly rough morning and wrote in her update that Dad realized “how ridiculous this is.” He later apologized to his daughter, and all three went back to the store and picked out the pair their daughter loved. Mom wrote that her daughter looks adorable—“dark brown plastic frames, slightly larger size, with rhinestones in the corner. Totally brings out her baby blues!” 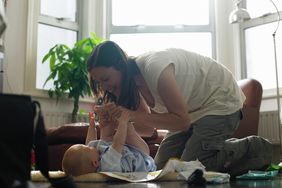