"Get sleep while you can," seasoned parents will tell you before having a baby.

The line can get real old, real fast. But when that little bundle of joy comes, you realize—perhaps a bit begrudgingly—that they were right.

Though newborns can sleep up to 17 hours per day, they need to be fed every two to three hours. In other words, you're not getting eight uninterrupted hours of shut-eye for a while. And, as one TikToker showed, sometimes it can feel like you're "sleep parenting." What is that? It's sort of like sleepwalking, but with a baby.

A video posted by @patricastoneathome on TikTok provides a visual example. "Tell me you just had a baby without telling me you just had a baby. I'll go first," Patricia says as she looks at the camera. Her fiancé, a new dad named Daniel, comes on the screen. His hair is in a bun, and he's rubbing his eyes with one hand as he's holding an invisible baby in the other. The actual baby is in a bassinet. But Daniel keeps rocking the baby.

In another scene, Daniel places his invisible baby in a bouncer, perhaps so he can have some hands-free time. Not that his hands weren't technically free to begin with. But that's new dad life for you.

In the comments, Patricia clarifies, "My fiancé is not sleep deprived. This is him waking up from a deep sleep to change a diaper! The rocking/the chair is habit from doing it 24/7…We're OK."

Most of the commenters kept it lighthearted.

"Ma'am, there's something you should know. He got a ghost pregnant and is there for both babies," quipped another.

That's mildly creepy, but at least it provided Patricia with a much-needed laugh.

"I wish I could like this twice," Patricia responded.

"My husband woke up to him crying and started rocking an invisible baby," another TikToker wrote.

Other commenters could totally relate.

"Last night, my son was in his bassinet, and I had my leggings in the bed with me. I thought it was him, and I tried to breastfeed my pants," wrote another.

"Woke up to my husband trying to burp a pillow. It happens," someone else said.

"I rocked my dog one time," responded another TikToker.

Hey, dogs are babies, too. It's OK. And others just love to see this new dad caring for his invisible—and real—baby.

"Oh, he's so sweet. That newborn exhaustion is next-level, though," the person wrote.

8 Things New Dads Can Do to Empower Themselves as Caretakers

The newborn phase can be a challenge, but there are ways to make life a little easier on yourself at night. Some experts suggest:

Though caring for a newborn is tough, it's also fleeting. Hang in there, and don't be afraid to ask for help. 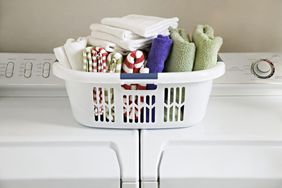