Get ready for some family fun! The first-ever live production of CoComelon is coming with new music and an adventure with JJ. Here are details on ticket sales and more.

Parents will either be cursing under their breath or relieved at the thought of new CoComelon songs getting stuck in their heads for them to sing unconsciously on the drive to work, at the grocery store, or when trying to fall asleep. That's all thanks to the show's first-ever live production coming soon.

Tickets for CoComelon LIVE! will go on sale on October 12, potentially creating a similar stir as the brand has on YouTube and popular streaming sites such as Amazon, Netflix, and Roku.

The multi-year world tour will follow main character JJ, as he attempts to write his own song for a show his family is putting on, and needs a little assistance. With a little help from his family and friends, and tapping into his own imagination, JJ teaches audience members how to solve problems with creative resolutions.

The interactive show also reinforces the importance of asking for help when you need it and will feature "magical special effects."

"We are excited to take fans of the show on a real-life adventure, with JJ finding his voice through song and dance," Michael Cohl, who operates the production company EMC, which is putting on the world tour, said in a press release. "We're proud to introduce a live show that captures the fun, warmth, and energy of CoComelon and creates a family experience that will never be forgotten."

As of right now, the tour will have performances at the Hulu Theater at Madison Square Garden in New York City and the F.M. Kirby Center for the Performing Arts in Wilkes Barre, Pennsylvania in early December.

Other locations include Philadelphia, Pittsburgh, Rochester, Charleston, and Boston. Parents and fans of CoComelon can submit a request for the multi-year tour to make a stop in their city by visiting CoComelonLIVE.com. And tickets are available at Ticketmaster.com. 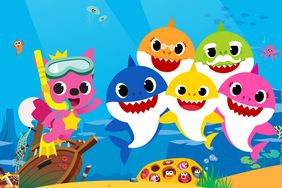