The popular accessories store is reviewing its ear-piercing policy after an ex-employee detailed her "cruel" experience.

Getting your ears pierced is usually just a quick little pinch, and then you're done. Yet sitting in a chair and waiting for a stranger to put a piercing gun to your ear lobe can be scary—especially for a kid.

Raylene Marks sometimes witnessed the fear while working at an Alberta, Canada location of Claire's, the popular accessories store which offers ear piercings. But one incident in particular forced her to quit.

In a now viral open letter to the company shared on Facebook, Marks said she was informed of a "cruel" piercing policy after a distraught 7-year-old girl cried and begged to go home rather than getting her ears pierced.

Ear Piercing for Kids: What to Know

"That child's message was loud and clear to me: Do not touch my body, do not pierce my ears, I do not want to be here," Marks wrote. "I'm inclined to respect a child's right to say, 'NO,' to any adult forcing any kind of non-medical contact on them, so I told the other piercer I wouldn't be part of the ear piercing for this girl."

Marks wrote that to her "great relief" the mother eventually took her daughter home without getting the piercings. But after the incident, Marks recalled telling her manager she "would not have been able to pierce that little girl's ears if Mom had insisted on it." The manager responded she'd have "no choice but to do it.'"

The manager also said other Claire's managers in the district follow the same policy: "Children can be held down and pierced. Children do not have a voice in the piercing process. The associate doing the piercing has no right to refuse to shoot metal through the ears of a child who begs not to be touched."

And with this information, Marks put in her notice to quit.

The open letter, shared on April 7, sparked outrage on Facebook and started discussions about child consent. "The policy should absolutely be changed," wrote one commenter. "Children should have a voice. Especially if it involves a body modification," added another.

A spokesperson for Claire's also told Parents.com they believe Marks acted appropriately and was in line with store policy.

"The policy is in place to ensure that if a child is distressed or resisting, Claire's employees have the right to refuse to continue the piercing," the spokesperson continued. "We are investigating the specific store instances she mentions, and will take appropriate corrective action. We will also be reviewing the policy to ensure that the intent is clear."

The company spokesperson also said, "Claire's has been piercing ears for more than 40 years, and has pierced over 100 million ears. Customer well-being is our main priority, and we ensure that any child piercing we do is carried out with the best care in consultation with, and with the agreement of the legal guardian."

In a message to Parents.com, Marks said she "would like to see Claire's include something in their policy that allows refusal of an ear piercing if the child gives their refusal to be pierced."

"We teach children that their bodies are their own and that they have every right to say, 'no,' to an adult touching them, and I feel this applies in every way to an ear piercing as well," Marks continued. "I don't believe parents should force their children into a piercing procedure—and I don't believe a company should make a profit off of that parent's choice to overstep their child's boundaries." 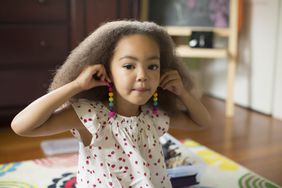 Ear Piercing for Kids: What You Really Need to Know