The basic income pilot program, which is the first of its kind in the country, aims to bolster maternal health and birthing outcomes among women of color.

Calls to address systemic racism with concrete government action are being heard in San Francisco. Acknowledging that the rates of premature births and infant mortality are significantly higher for women of color compared to white women, the city has announced a pilot program called the Abundant Birth Project, which will provide $1,000 a month to pregnant Black and Pacific Islander women through the duration of their pregnancy and for six months after they give birth.

Here are the specifics.

How the Program Will Work

A program will provide an unconditional monthly income supplement of $1,000 to approximately 150 Black and Pacific Islander expectant people in San Francisco for the duration of their pregnancy and for the first six months of their baby's life. The program's goal is to eventually provide financial support for up to two years post-pregnancy, according to a news release shared this week by San Francisco Mayor London N. Breed.

The release explains that The Abundant Birth Project will work with local prenatal care providers and the city's network of pregnancy support services to identify and enroll eligible clients over the next two years. They'll specifically look for pregnant people who are low-income and middle-income, given the high cost of living in San Francisco.

Then, Expecting Justice, a collective impact initiative led by Dr. Zea Malawa at the San Francisco Department of Public Health, will study the resulting health impacts of the program.

The project will be funded by philanthropic donations and city funding, including $1.1 million from Jack Dorsey’s #startsmall campaign, the Hellman Foundation, Genentech and the city’s health department.

The Case for the Program

According to the Centers For Disease Control and Prevention, Black and Indigenous women are three times more likely to die from a pregnancy-related cause than white women in the U.S.

Prematurity is the leading cause of infant mortality, according to the mayor's news release. And Black infants in San Francisco are almost twice as likely to be born prematurely compared with white infants (13.8 percent versus 7.3 percent, from 2012 to 2016), while Pacific Islander infants have the second-highest preterm birth rate (10.4 percent). Furthermore, Black families account for half of the maternal deaths and over 15 percent of infant deaths, despite representing only 4 percent of all births. Pacific Islander families face similar disparities.

To combat this, the supplemental income is meant to be "an economic and reproductive health intervention," according to the news release.

"Structural racism, which has left Black and Pacific Islander communities particularly exposed to COVID-19, also threatens the lives of Black and Pacific Islander mothers and babies," said Dr. Zea Malawa in the news release. "Providing direct, unconditional cash aid is a restorative step that not only demonstrates trust in women to make the right choices for themselves and their families, but could also decrease the underlying stress of financial insecurity that may be contributing to the high rates of premature birth in these communities. It is exciting to be in a city that not only calls out racism as a problem, but also takes steps to heal the wounds left by decades of injustice and anti-Black sentiment."

Mayor Breed added, "Providing guaranteed income support to mothers during pregnancy is an innovative and equitable approach that will ease some of the financial stress that all too often keeps women from being able to put their health first."

Maternal Health is a Public Health Crisis, Here's Why

How This Could Bolster Maternal Health in the U.S.

The Abundant Birth Project will be the first program of its kind in the U.S., and its inception does come on the heels of a similar proposal from New Jersey Governor Phil Murphy which, if passed through state legislature, the state would give families earning under $131K per year a $1,000 "baby bond" upon the birth of a child.

Both programs are serving to show that lawmakers are working to create positive change for parents who have faced ongoing inequality for far too long. Here's hoping they'll take root and lead to long overdue federal support. 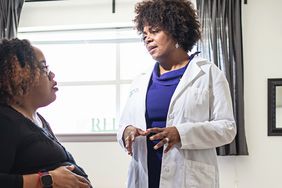