Missing Black, Latinx, and Indigenous children and adults seldom make headlines or get search efforts the way white victims do. Their parents are asking for their children to get the same attention as Gabby Petito.

Many continue to mourn the tragic loss of 22-year-old Gabby Petito after her remains were found in September. The young woman, who went missing during a cross-country road trip with her fiancé, Brian Laundrie, whose body was later found in a Florida nature reserve in October, continues to make headlines all around the country as authorities investigate her death and search for answers.

The story is devastating. But it also shines light on a disturbing truth: the racial disparity in missing persons reports. Tens of thousands of similar cases continue to go untold. The defining difference between Petito's story and those that never make the top news stories, or any at all, is often just that of race. The missing persons reports that come from Black people and people of color are often tossed aside and forgotten compared to files on missing white people, and especially white women.

"Over the past weeks, we have seen firsthand how national media coverage can galvanize a community to help find a missing person. Unfortunately, Black and Brown missing persons often don't make the headlines despite making up close to 40 percent of all persons reported missing," say Natalie Wilson and Derrica Wilson, the cofounders of the Black and Missing Foundation. "This disparity has led to many families still looking for answers and struggling to get the awareness they deserve to bring their loved ones home. We can no longer ignore the facts and must work together to change these inequalities. This includes law enforcement, media, and the community working together to make a difference."

In 2020 alone, the FBI's National Crime Information Center (NCIC) compiled more than 89,000 current missing persons cases and over 35 percent of them consisted of people of color. But only about a fifth of their stories get told, according to a 2016 report published in the Journal of Criminal Law and Criminology. And state and federal data on missing Indigenous women and girls is very poorly recorded. The National Crime Information Center reported in 2016 that there were 5,712 reports of missing Indigenous women and girls but only 116 cases were logged in the U.S. Department of Justice's federal missing persons database, NamUs, according to a report from the Urban Indian Health Institute.

It's no accident nor coincidence that their stories aren't publicized or documented in the same way, as issues of hyper-criminalization and white privilege play major roles in how people's stories are told, if they are even told at all.

Shawn Wilkerson, stepfather to Akia Eggleston who was last seen on May 3, 2017 in Baltimore City, Maryland

You think to yourself, 'Well, what makes her different than my loved one that is missing now?' The only thing you can say is the color of her skin."

— Shawn Wilkerson, stepfather to Akia Eggleston who was last seen on May 3, 2017 in Baltimore City, Maryland

"Missing white woman syndrome," a term used to represent the disproportionate attention that marginalized communities receive when they're reported missing compared to the overwhelming concern given to white women who disappear, has been gaining attention. White women's stories often trend, their families get to make public statements, vigils are thrown, national newspaper stories are printed, and people from around the country volunteer to find them. Losing them is an emergency, an immediacy that no one overlooks.

Meanwhile, here are some of the stories of of Black and Brown women who have disappeared without any answers. Their families wish to express both their grief and hopes for change.

Chelsea Michelle Cobo of Brooklyn, New York, was 22 when she went missing on May 7, 2016. The Latinx mom of one had a "smile that lit up the room," says Rose Cobo, her biological aunt and adoptive mom. "Chelsea is a young woman who has a passion for life and loves her family," she adds. Rose describes Chelsea as a creative woman who dreamed of giving back to others by pursuing a career as a speech therapist.

Rose last dropped Chelsea off at a Brooklyn hospital and she was later supposed to be transferred to a facility in Yonkers, New York, according to news reports. Chelsea was never heard from again. Even after hiring a private investigator, Rose remains without any answers.

Now Rose is fighting so other parents don't have to suffer the same heartache. "I can't change what happened to my daughter, Chelsea Cobo, who has been missing for five years," says Rose. "But I am going to change what happens to the next missing child." She's joined 911missing.org, which is working to develop an app to help prevent new missing cases from becoming criminal ones. "Families can't afford to lose a minute," says Rose. "We need active searches as soon as a loved one disappears."

Rose has also been working with Girl Vow, an organization that started a national task force called #Pullupforblackgirls, which focuses on missing Black women. They use social media to raise awareness while also hosting community forums to address national, state, and local issues and advocate for equity.

Kassandra Ramirez disappeared on September 19, 2018, when she was 25 years old. The Latinx mom of one had just graduated from culinary school. "She embraced her love of life and people," says her mother Ingrid Santana Ramirez.

Kassandra was last seen helping an elderly woman with bags at 11:30 p.m. in the Bronx, New York. She had told her cousin, whom she was staying with, that she was going to meet with an ex-boyfriend. Kassandra's family hasn't heard from her since. According to news reports, the police did speak with the man Kassandra was reportedly going to see, but her whereabouts remain unknown.

"She provided an act of kindness to a stranger—that was my Kassie. A young adult Latina woman who would stop what she was doing or where she was heading to help," says Ingrid. "Now, she needs help. Kassie needs help from the community, elected officials, and the NYPD."

"We're not just looking for one person, we are looking for two people—she was eight months pregnant," says Shawn Wilkerson. His stepdaughter, Akia Eggleston, was 22 when she was last seen on May 3, 2017 in Baltimore City, Maryland.

A few days later, she never made it to her own baby shower and the family reported her missing. Eggleston, who is Black and also has a daughter, was dropped off at her apartment by a friend and then never seen again.

"Sometimes you feel that you want to just give up, but you can't, because if you do, who's going to care for your loved one?" says Wilkerson. "In our situation, there's no one really reaching out, there's no one calling the house, beating down the door, asking what we can still do. It just gets to a point where you feel like you're fighting a war that you can't win."

Eggleston's mother, Angela Eggleston, recounts the familiar name of Laci Peterson and how the coverage of her disappearance and death while being eight months pregnant was widely publicized. Her daughter hasn't received half as much of the same attention.

Wilkerson echoed the feelings of so many erased Black and Brown missing people saying the Petito case has made it more evident. "We know what this is, it's a form of racism, of social injustice. It has meaning to every person that has ever lost a loved one of color. You think to yourself, 'Well, what makes her different than my loved one that is missing now?' The only thing you can say is the color of her skin."

What started as a normal day in Richmond, Virginia for Toni Jacobs on September 26, 2016, quickly turned into a parent's worst nightmare: Her 21-year-old daughter Keeshae, who is Black, went to spend the night at a male friend's house and never came home.

"I was like, 'Let me know when you get there and be safe. Be careful.' She was like, 'I love you' and I said, 'I love you too,'" says Jacobs. "That was the last time I talked to my daughter."

When Jacobs alerted the police that her daughter was missing, instead of concern, she says they met her with aggression. "Well, she's 21 years old, how do you know she just doesn't want to be bothered?" the police officer asked Jacobs, who then had to pull out her phone to prove that her daughter typically called her every day.

While police have since suspected foul play, there are still no answers. Jacobs has done as much investigating on her own as she can. But without the help of police or national media, Jacobs and loved ones have been forced to rely on one another for any answers possible.

How to Help Black, Latinx, and Indigenous Children Who Go Missing

Without an increase in awareness, support, and mainstream attention, the toxic culture of erasing missing Black and Brown communities will never end. However, people can help to bridge this gap by bringing attention to all that go missing, not just white people.

They can support locating missing people of color and others by connecting with GirlVow, Black and Missing Foundation, and other organizations to volunteer assistance. Sharing flyers online, joining community searches, word of mouth, and even providing financial assistance for larger scale searches can go a long way.

For the missing Black and Brown people that go missing without any regard, doing nothing can't be an option. These children matter just as much. 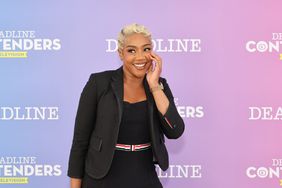