What Michael K. Williams' Role in 'Lovecraft Country' Taught Us About the Complexity of Black Fatherhood

The actor died at 54 but left behind a thoughtful portrayal of how trauma affects Black fatherhood through his role as Montrose Freeman in Misha Green's "Lovecraft Country."

On Monday Sept. 6, 2021 the New York police department found actor Michael K. Williams dead in his apartment at the age of 54.

Although this loss is sudden, Williams' impact was notable. His role as Montrose Freeman on the Emmy-nominated HBO original "Lovecraft Country," developed by Misha Green and based on a novel of the same name by Matt Ruff, is the prime example.

From the mystical Book of Names to a deadly Kumiho and so much more, the show was a profoundly supernatural tale.

However, not all of its curses belong exclusively to the magical realm. In many ways, the story of Montrose Freeman and his son Atticus Freeman revealed the true reality of how generational curses affect the relationship between a Black father and his son.

RELATED: This Black Dad Activist is Changing the Narrative Around Black Fatherhood, One Instagram Post at a Time

Bound by bloodline and deceptions, the show is all about the unraveling of a family legacy with music, lore, and themes marked by slavery, Jim Crow, and suffering but also kept alive by love, Afro-futurism, and the hope to create a happy ending.

Williams' Emmy nominated portrayal of Freeman presented a complex character that could even present as the villain of the story. Yet, his struggles as an alcoholic Black father illustrated the complexities of multi-generational trauma and queerness in the Black community.

He captured something unique about the legacy of trauma and how it's passed down from generation to generation. As a teen, Freeman experienced beatings from his father in an effort to make him straight, the death of his loved ones during the Tulsa Massacre, and a secret romance with another boy named Thomas, who was murdered during the massacre.

Despite the racial trauma from white society during the destruction of Black Wall Street and his father's disapproval, Freeman still wanted a family of his own. Despite an intersection of cyclical pain and dehumanization—along with cognitive dissonance when it comes to fitting the societal mold of a Black man and Black father always being harsh and cold—there was love at the core of their relationship.

After adapting to merely survive the brutality of slavery and its afterlife, continual institutional racism prevents multi-generational healing. It aggravates the already lingering psychological and flesh wounds from anti-Blackness.

In turn, this has given Black parents the inequitable task of raising healthy children, even if they come from broken homes and unresolved trauma. Black fathers are expected to conceal their pain and never show weakness. This is evident in Williams' portrayal of Freeman.

While he couldn't simultaneously heal himself and fully embrace his son, his devotion eventually became evident in the show.

During a 2020 interview about his role as Freeman with People, Williams explained how painful it was to play such a character: "We meet this man, and he's already a survivor of the Tulsa Massacre. He moved to the south side of Chicago, which is kind of a war zone in itself. This is also happening through the Jim Crow era. He has issues, unresolved issues about himself that he was never allowed to explore."

There are times when Freeman presents as the antagonist. He beat his son for years, hides pertinent information, keeps his sexuality a secret, including his relationship with a man named Sammy, then even murders someone he believes to be a threat to his family.

With that said, there are moments when he'd dare to embrace himself by attending a drag ball and connecting with the LGBTQ community. He was a character who wanted inner peace. Like for many Black fathers who have experienced hardship, it wasn't easy.

In an interview with the Los Angeles Times in August 2021, Williams' shared, "Montrose was given a book of stereotypes as to what it means to be a man, especially a Black man, in America. Vulnerability, softness; those are not celebrated in the community. Your experimental sexual experiences; none of these things are celebrated in the 'hood, in the community Montrose came from, or that I come from, for that matter."

Freeman's story connected personally to Williams' own troubled past when it came to being a Black man and Black father.

"He comes from such a broken place. I just had to find my own pain and my own trauma, which was a very painful experience for me. All the generational pain that had been passed down through my own personal experiences, I had to dig deep down in that for Montrose," he explained to People.

Freeman represents the result of brutality not so far from Williams' real-life experiences growing up around violence.

Williams grew up in East Flatbush, Brooklyn in Vanderveer, in the projects. Surrounded by normalized neighborhood violence and a strict yet loving mother, Williams found himself struggling with alcoholism and drugs for most of his life.

The notable scar on Williams' face traces back to his 25th birthday when he was drunk and got into a fight with another man. The man nearly killed Williams with a razor blade. He explained to The Hollywood Reporter that the incident was "just me being out of character, once again," which also fits the description for Freeman, who often said hurtful things that he didn't seem to mean but couldn't take back.

Although his son Atticus Freeman expressed resentment towards his father for most of the series, when Freeman goes missing at the beginning of the show, Atticus goes looking for him.

They protect each other and often even comfort each other, despite getting in continual fistfights and arguments. It's a complex bond that's cemented by both love and trauma. They both gradually see things through one another's eyes and come to understand that a cycle of pain is hard to break—maybe even harder than breaking a magical spell.

Perhaps one of the most defining statements from the late actor on his role as Freeman were his words to People last year.

"I would hope that after watching Lovecraft, people walk away with this understanding of the beauty and necessity of a father-son relationship in the Black community. Black fathers have been ripped away from their sons for so many years—mine included," he said. "I hope Montrose will remind us how much little Black boys need their fathers." 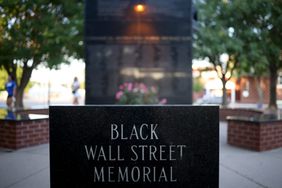