West Africa had a long legacy of powerful women and gender fluidity that was buried by colonialism. That history is reemerging through stories like 'The Woman King.'

Perhaps when you hear the phrase "female empowerment" you think of Rosie the Riveter or Disney's Frozen franchise being more about sisterhood than their traditional damsel in distress theme. But female historical figures represented strength, empowerment, and independence from the start, long before these American representations of strong women came along.

Inspired by true events, The Woman King starring Viola Davis tells the story of the Agojie, an all-female army, protecting the African kingdom of Dahomey. During its opening weekend, the film dominated box offices with $19 million in ticket sales. The story which is set in 19th century West Africa when the Atlantic slave trade was at its peak, shows the fortitude of these women fighters who relied on each other and not the saving grace of men to protect their kingdom.

The film has sparked many conversations such as the real-life King Ghezo's role in the trading of Africans to colonists during his reign and the responsibility artists have in portraying true events authentically.

But the conversation about female and LGBTQIA+ empowerment struck the attention of movie-goers, like Danielle Reed who saw the movie twice, particularly hard as American media hasn't always pushed these stories to the forefront.

Reed grew up in a single-parent household after her parents divorced when she was eight years old. Seeing an all-women warrior unit on-screen allowed her to feel an appreciation for being raised by a Black woman in a new way.

"We have predominantly white women superheroes and so there are actually very few strong Black women, animated or real-life characters that growing up Black in America I've seen on a big screen," Reed said. "It was very heartwarming, empowering, and uplifting and it was also healing in a way."

After her father passed away in 2020, Reed and her boyfriend moved back home to Atlanta from New York to be closer to her mom. After Reed fell in love with the movie the first time, she knew her mom needed to experience it too.

"I still am someone who's kind of trying to be the glue and provide support for my mom. That's why I took her to see The Woman King, I knew it would be something that would uplift her, and also hopefully provide just a sense of empowerment since she was going through a tough time. She cried and got emotional and I was very happy just to share that experience with her. That's why I moved home so I could still have a close relationship with my mom because we've always been very close."

Like Reed, Aquila Benjamin was raised by a single mom. Now that she's at a point in her life where she's pondering having children, she says she didn't lack anything being raised in a single-parent home and wouldn't be opposed to doing the same for her child if need be.

"We didn't really have a lot of money, but it didn't stop us from being exposed to cultural things in our community, we traveled," Benjamin said. " I know that people can't say they had a good life with a single parent but we didn't go without. It's actually a really good life and it has actually taught me not to be lazy, to get up, and that what I needed in life isn't gonna fall in my lap."

Within Western culture, there's this claim that gender is binary. In a West African context, there is largely what scholars have called a flexible gender system that rejects the rigidity of binary sex or binary gender.

Reed hadn't heard of many stories like the one in the film beforehand, but she hopes as our culture shifts and embraces strong women more, stereotypes of what she is capable of will dissipate.

"I hope that we step out of that mindset that you have to look a certain way because even in spaces now, me being plus sized, a lesbian, I'm judged by my physical appearance or my preference, and it's draining because little do you know, I can help you but you're so worried about how I look or how I present myself or who I date that that really stops some people from networking and elevating."

Black women, and particularly members of the LGBTQIA+ community, have had to fight to break out of the proverbial box of what they're capable of as minorities in this nation. But just like in The Woman King, not everywhere you go in the world has the same rigid gender binary that the western world has, allowing for more stories like the one in the film to be the cultural norm.

Dr. Anima Adjepong, Ph.D., is a professor at the University of Cincinnati and the author of Afropolitan Projects. Although the plotline of The Woman King deviates from traditional western storylines, Adjepong says that women warriors aren't an anomaly in African contexts.

"Colonialism formally ended in the 60s in many African countries, and yet there's a residue of colonialism," Adjepong said. "One of the key things is the coloniality of gender. The coloniality of gender is a term that was introduced to us by Argentinian philosopher Maria Lugones. Within Western culture, there's this claim that gender is binary. In a West African context, there is largely what scholars have called a flexible gender system that rejects the rigidity of binary sex or binary gender."

The film industry is overwhelmingly white and male, which plays a great deal in how art is created and portrayed. The cast and crew of this film are largely comprised of women which matters as efforts to tell more diverse stories onscreen are prioritized.

"The media doesn't exist in isolation, the media is a cultural artifact," Adjepong said. "What that means is that it's produced by people and it is a space in which dominant ideas about society are expressed, but it's also a space in which those ideas can be challenged. If you use the example of Disney, for example, there are these immediate ideas about normative heterosexuality and women's kind of dependence on men has historically been reproduced in very white ways."

Lauren Woulard and her wife have an eight-year-old daughter. When she saw the film she immersed herself in the storyline, even chanting and cheering in the theater as it made her think of her upbringing being raised by strong matriarchs.

"It's just so nice to see ourselves represented in roles on the screen that we would have never imagined," Woulard said. "People may think being LGBTQIA+ or even a women-led household that we don't have some of the same traditional struggles that any hetero relationship would have. But we have those same kinds of conversations and in especially as it pertains to having a daughter."

Woulard says she would consider taking her daughter to see it because of how proud the film made her be, and come from, a Black woman. But above all, the message about platonic relationships stood out to her the most in the film.

"I want people to understand that you can have platonic friendships. There was something so beautiful in their sisterhood that didn't require them to be romantically attracted to each other. It was a beautiful representation of what Black women's sisterhood looks like." 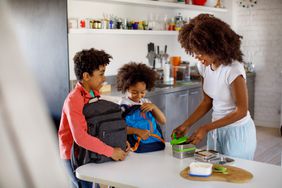