We hold their traumas in our DNA. We will tell their truths, and we will take them home. They are our ancestors, and theirs are the cells that bind us.

For as long as I can remember I've felt the pull of France. I spent a day in Paris when I was eight-years-old and was filled with awe and wonder at the architecture and the seemingly endless cycle of cars circling the Champs de Elysees. But the pull to be there was not that of someone who wanted to go back and see the sites. It was a pull to return home. Except, I wasn't born there. I was born to a Puerto Rican mom and Black dad in Manhattan, New York. Yet, I haven't been able to shake the feeling that I have connection there—I lived there, perhaps in another life? I don't know. What I do know, with absolute certainty, is France is in me. It's in my bones, in my blood, in my cells.

Fast forward 32 years and my best friend Faith and I traveled to London to celebrate our respective birthdays. It was the best trip we could have possibly taken. I was having an unconscionable amount of fun—until I wasn't.

On the night we traveled into Brixton to take in a Leon Bridges concert, I was giddy with excitement. But when we stepped out of the train station in Brixton my excitement turned into a punch in the chest. I immediately felt unsafe. I felt like my life was in danger and I wanted to get right back on the train and head to our flat in Fulham. Every hair on the back of my neck stood at attention, I was both hot and cold, and I wanted to vomit.

RELATED: How to Make a Family Tree With Kids

I mentioned to Faith (in very general terms) what I was feeling, and she remarked that she felt fine. I should note here that Faith is white. She didn't feel the slightest bit of what I was experiencing. What I felt was much deeper than surface level – this feeling ran deep into my bones. It didn't go away until we returned to our flat just after midnight.

The feeling of needing to return to France and the feeling of being terribly uncomfortable in Brixton have been things I've never fully understood—until now.

Two years after visiting Brixton I found myself obsessed with John Boyega and Daniel Kaluuya. Blame it on my unflinching love for Idris Elba, or more specifically, beautiful Black men with English accents. In googling these men I happened upon an interview with Daniel Kaluuya, in The Cut. The interview was addressing how the actor felt about having to prove his Blackness, but midway through the interview he said something in reference to being Black in the UK that floored me: "[They] had to live in a time where they went looking for housing and signs would say, 'NO IRISH. NO DOGS. NO BLACKS'... That's the history that London has gone through. The Brixton riots, the Tottenham riots, the 2011 riots, because Black people were being killed by police."

A quick Google search revealed that there was a major clash between the Afro-Carribean community of Brixton and the police, which was a direct result of Operation Swamp 81. The clash, which Kaluuya referred to as the Brixton Riots, left 299 police injured and 65 protestors injured. And according to this more recent article in The Guardian, Operation Swamp 81 "consisted of 100 officers patrolling in plainclothes in certain areas between 2 p.m. and 11 p.m. daily. About 1,000 people were stopped and 100 arrested for a variety of offences, of which only a few were for robbery or burglary." The article goes on to describe the scene after Operation Swamp 81 had been carried out as looking "as though there'd been a bombing raid in Brixton."

In Brittany Simmons' thesis A Tale of Two [Gentrified] Cities: Detroit and Brixton, she tells of the 1993 killing of 18-year-old Stephen Lawrence by a group of white teenagers in Brixton. Up to that point, it was deemed the highest-profile racial killing in UK history. In this same paper, Simmons goes on to tell of Wayne Douglas, a Black man, who just two years after the killing of Stephen Lawrence, was killed while in police custody.

And so there it was. Ancestral trauma and cellular memory in one terribly wrapped box.

Long before I'd ever stepped foot in Brixton, there had been violence and death and police brutality against people that looked like me, and I had walked directly into that energy. Every single cell in my body felt it and responded accordingly. It wasn't the trauma of my direct ancestors, but it was the trauma of a people that look like me. My ancestors experienced it vicariously. My cells woke up, felt the vibe and said "run."

Think of it like this: You walk into a room and immediately feel uncomfortable. You can't explain why but essentially, your cells are triggering you to be on alert because something isn't right. We call this gut instinct or intuition, but on a biological level it seems more like our body trying to protect us.

Epigenetics, or the study of how our environment can change gene activity, explains this experience. According to a growing body of research on the subject, trauma can leave marks on our DNA, and we then pass that trauma down to our children and their children. Researchers note that racial trauma doesn't change your genes but rather your gene expression. As a result, we can feel triggered by something, like the Brixton riots, that traumatized our ancestors.

I immediately called Faith to share my "history of Brixton" discovery, and she asked me how I knew (when we were in Brixton). I told her I didn't.

But perhaps instinctively, I did.

Which leads me back to France. Why do I feel this unrelenting desire to return to a home I've never known? Is it because my cells know France intimately?

In a very random discussion with my aunt, it was revealed to me that my maternal great great grandparents had been bought in Africa, enslaved, and taken to France. They stayed in France, still as enslaved people, for about a year and then were taken to the Caribbean—Puerto Rico to be exact—and sold into slavery yet again. As the story goes, my great grandfather, a Puerto Rican man, bought them. They went on to have a daughter, and when she was fourteen, my great grandfather married her. She went on to have 10 live births, one of them being my Nana. My Nana had my mother, my mother had me, and when I was eight, I went to France. My body has been trying to get back there ever since. My cells remember. My body serves to tell the story.

RELATED: Colorism Affects Latino Families—Here's What Parents Can Do to Stop It

Memories that did not belong to me, being drawn to places for no known reason, only to discover a personal connection from generations ago. But sometimes it comes across more subtly. Sometimes the trauma in our cells prompt us to tell a story that has nothing to do with us but has everything to do with us. Sometimes they are asking us to shed light, teach, inform, so that our ancestors won't be forgotten. They need us to let the people know.

"We were here. Tell our story."

Trauma psychotherapist Jennifer O'Neill, MSW, LAC says it much more eloquently: "We are trying to finish a sequence that was interrupted—a sequence that was meant to keep us safe." This feeling of "unsafe" may not belong to us, but we have been called upon to tell it. O'Neill says that she sees this often with her clients that are undergoing eye movement desensitization and reprocessing (EMDR) therapy. "They will sometimes flail their arms or look like they are bracing for impact, because they are trying to complete a sequence of safety. And when it comes to our ancestors, it seems as though we are coming full circle with them, in order to return what may have been lost." Perhaps we are simply completing their sequence.

Maybe my great grandmother was born in France and then taken to Puerto Rico and is pulling for me to take her home. Maybe there are things about my history that I will find in France that will show me where in Africa that part of my family is from, and my ancestors can finally find rest in their respective homes. I don't know. But I do know they are pulling and tugging and shoving and showing not just me, but all of us. Black storytellers, Black musicians, Black artists, Black writers and photographers, Black filmmakers—they are calling on us all to return what has been lost: the truth.

They have taken up residence in our beings. Their trauma has changed our cells. And the irony is not lost on me that as I wind down this essay, I hear a quiet voice singing the ancestral hymn, "Swing Low Sweet Chariot" in my ear. 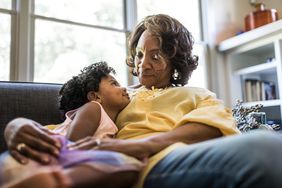