After her brother's untimely death, the Bravo star has taken on a new role.

Quad Webb landed on the scene in 2013, appearing on Bravo's new reality show Married to Medicine. Webb's quick wit, outgoing personality, and sharp tongue won over viewers and made her a fan favorite. Nine seasons later, Ms. Quad—as she is well-known—is on her way to building an empire as a businesswoman, TV personality, author, chef, and talk show host.

In an interview with Kindred by Parents, the reality star opens up about having a multigenerational household, parenting from the lens of an auntie, and being the strong one in the family. In the new season of Married to Medicine, Webb's living arrangements are quite different from what we've seen in the past. Her mom, Mary, nephew, Mason, and older brother are now living with her. Webb is raising her seven-year-old nephew Mason partly because of the untimely passing of her brother, Quentin, in 2020. The owner of a lavish new home in Georgia, Webb says she's blessed in all places and all walks of life. She credits God for everything.

"For me, I just enjoy my family. It's the pillar of the cornerstone of who I am," says Webb. Webb's father raised her to always be there for her family. At age 5 or 6, he told her that if anything were to happen to him, she would be responsible for the family. Webb has done just that. It's given her great joy to do so, to help change the quality of life for her loved ones. She's also had a hand in the upbringing of some of her younger family members.

Webb spoke about her parenting style in a multigenerational household compared to her upbringing in Memphis, Tennessee. Today, her parenting style is similar to her parents' as it involves instilling values, moral self-esteem, and respect. Where it differs, Webb doesn't believe in using weapons to discipline. "I don't want to do that because I don't want to expose the children to violence," she says. Instead, building a bond based on trust, love, and having an open dialogue is vital.

Webb's parental superpower is her sensitivity because it makes her empathic. "I can feel when someone is hurting. I can feel if they are not happy and when they need some help." As a caregiver, she has learned that her sensitive nature works in her favor while raising her nephew, Mason, allowing for a softer approach. Then she can engage with him in a different manner where they are comfortable opening up. In addition to Webb's nephew Mason, she's also been active in the lives of her older nieces.

"I'm mindful of how I speak to my nieces and nephew. I treat them like my children, although I don't have any. I treat them with love and respect. When you use empathy, you have patience and are not quick to react or anger," says Webb.

Webb questions Mason about his lack of focus at school in the premiere episode of Married to Medicine this season. When Mason responds that he's thinking about his late father at school sometimes, an emotional exchange occurs between them and Webb's mother, Mary. The philanthropist says her loved ones look to her for guidance as they cope with the passing of her brother; she believes she is the strength and the rock for her family.

Although many Black women are giving their superwoman capes a rest and working on self-care, which means taking off that armor, Webb has a different approach to her life in this season of grief. She's leaning into her assignment of resilience and setting aside grieving for her brother for a later date when she plans to focus on grief therapy, counseling, and meditation to heal. She's choosing instead to pour into her family since they rely on her. Her goal is to bring understanding and peace during their time of need.

Still, the Bravo reality TV star takes time to center herself and expresses her emotions. She's seamlessly eased into her caregiver and auntie role but takes it seriously. "It's a pleasure for me to bring joy to my family. It brings me great joy because I'm present," says Webb.

Webb advises caregivers who step in and care for children in their families to have patience with their loved ones. It's a privilege to have siblings present, so count your blessings. She says that part of parenting is not being ready, learning on the go as you and the child grow together. Married to Medicine fans can expect to be entertained as more unfolds this season with Ms. Quad and her beautiful family, including interactions with Mason's mom. She is very much involved in his upbringing. "It's important that I never take the position as a mom, especially when there's a mom present. I'm just a helpful aid," says Webb. "That's my mindset, and that's never going to change. And I think when people take on this responsibility as a caregiver, you can't go back and whisper and say nasty things to the child about their parents." Cultivating a household filled with love, bridging the gap, and providing empathy and an extreme sense of understanding will go a long way. 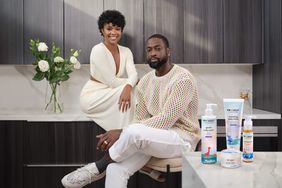