In a new, award-winning documentary, director Edward Buckles Jr. tells the untold stories of New Orleans children in the aftermath of Hurricane Katrina.

In late August of 2005, New Orleans experienced one of the deadliest and most devastating storms to hit the United States. Hurricane Katrina, a category 5 storm at its peak that caused levees to break, totaled homes and infrastructure, and ended the lives of over 1800 people. It wreaked havoc on a city that was already below sea level. New Orleans was arguably affected the most, and an insufficient government response only caused more devastation, leaving survivors without supplies, shelters, and resources.

In the midst of the chaos of trying to cope and rebuild, many children felt lost and neglected while coming to terms with the fact that the sense of community they once had was stripped away over the course of a few days. In Katrina Babies, a documentary that recently won the first Human/Nature prize at the 2022 Tribeca Film Festival, director Edward Buckles Jr., Tribeca's Best New Documentary Director winner, aims to shine a light on the experiences of those who lived through this ordeal as children. Through a series of interviews with members of the community who were between the ages of 3 and 19 when Katrina hit and their families, and touching personal commentary, the documentary gives a different perspective on an event that shook the nation. Buckles Jr., only 12 years old at the time, found the basis of the film in one fact: no one asked how the children were doing.

"No one" doesn't refer to other affected members of the community, but experts and authorities who could've made a difference. "I would've needed specialists and experts to propose things to us. If someone who practiced in mental health or someone who practiced in therapy were to ask me, it would've been more than just asking. They would've been setting me up to deal with the trauma that would come," Buckles Jr. said in an interview with Kindred by Parents. In the aftermath, the trauma would continue to deepen for many, especially after a lack of, or completely inadequate, assistance from the government. For example, displaced residents were given trailers riddled with formaldehyde to stay in as they tried to recover, some having 40 times the amount found in modern homes.

He recalls hearing of trauma-informed programming that called children "sad, not bad." "I remember it was this organization in New Orleans called 'sad, not bad.' That just resonated so much with me. When I saw that, I was like 'I'm not bad. I'm just sad.' How can you blame us for how our trauma is surfacing?"

Living through such a traumatic experience that forced surviving families to relocate negatively affected their behavior. With few options for coping, many children were unable to regulate their emotions. One subject in the documentary recalled visiting the ruins of her home and the pain of leaving the grounds with the only belongings she could gather—one trash bag that was not completely filled. Even in moving to new areas, children faced a different set of problems in trying to fit in and constantly being referred to as refugees.

One of the elements that truly make the documentary special is the interviews with members of Buckles Jr.'s family. Holidays can be hard to get through when processing and working through distress. Before Katrina, his family, like many Black families, would all gather to celebrate and enjoy each other's company. Following Katrina, this changed significantly and the impact was felt by the family.

During a small gathering, Buckles Jr.'s cousin called from home, displaying feelings of dejection. In speaking with her, she mentioned his passion for theater and told him that he would one day make a story about her life, starting with Katrina. In describing the experiences her children went through, whom Buckles Jr. grew up with and regarded as his best friends, "something clicked." He credits his parents and cousin Tina for understanding the importance of the story, though it was hard for him to hear their recollections at times.

The new reality that New Orleanians faced in the aftermath became an obstacle in furthering the film for Buckles Jr. "I think one of the hardest things about making this film was just how true it was. There's no lies told," he says.

Vulnerability in telling such a personalized story on a large platform also played a factor. However, he pushed forward despite the fact that the circumstances the New Orleans youth faced were worsening, including a failing education system and rising violence. "My goal and dream for this project was just for people to believe me, and hear me, and take my audacity and take all of the stories that I thought were important and just listen to them," says Buckles Jr.

Some may mention that since Hurricane Katrina is one of the most well-known and documented storms, it is not a story worth telling again. Buckles Jr. feels otherwise, saying, "That's the problem. We're treating Katrina as if it's finished, as if that story is old. How can you say that we don't want to hear anything about Katrina when no one spoke to the kids? We're missing a whole different dynamic."

To young, aspiring Black directors who may come from similar backgrounds, Buckles Jr. has this to say. "One of the biggest pieces of advice that I literally live by and that I want to inspire people to do is work across. Work with who and what you have. Build relationships with the people right next to you."Katrina Babies premieres on HBO on August 24th. 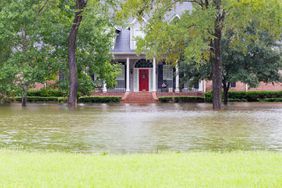 How to Talk to Kids About Natural Disasters